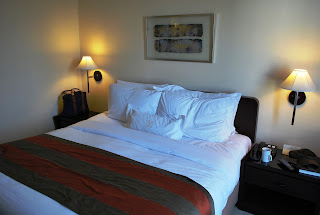 In the last few days for no obvious reasons I had this feeling of going back to Kuantan. At this age one at time became emotional on small happening like this. I guessed its part of growing old when memories came flooding back from time to, nostalgic indeed. I just wanted to go to Kuantan, my hometown, a small town on the east-coast of Peninsular Malaysia, a town where I was born in 1939 and grew up. Then start working at the beginning of my working life until I left for a greener pasture in 1967. I would come back to Kuantan from time to time to visit my parents, relatives or friends. So this time I told my spouse that I wanted to go to Kuantan and she say just to go ahead but she could not go with me as she usually did. It was all right for me. A relative who did a regular visit to Kuantan where they have a condo there say they are going there and invite me to come along. 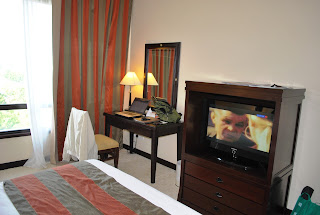 So this morning I decided not to drive but to hitch a ride in their car. We left KL at just past nine in the morning. It was raining heavily and it stops when we got into the Karak Highway. Since I was not driving I just sat and enjoy the trip while chatting along.  They say they had to make many stops on the way and I told them it is all right with me. The first stop was the town of Temerloh and had lunch at the old Rest House and then move on where they made another stop on the way. We eventually arrived in Kuantan at just before four in the afternoon. I check in at the Vistana Hotel, the hotel that I call home here. Had a rest and a cup of coffee and start typing this. The weather here is fine. I would be going out for dinner and then would call the day off. Tomorrow would do some adventure in and around the town.

On the left are images of the hotel room professionally designed.and I just loved it. 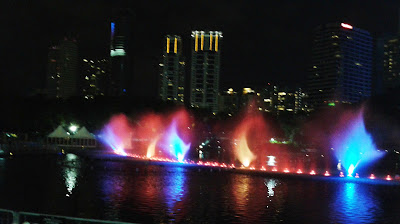 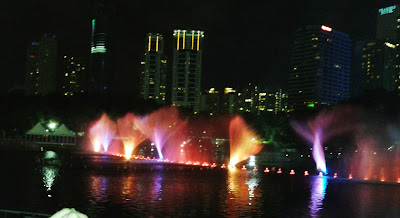 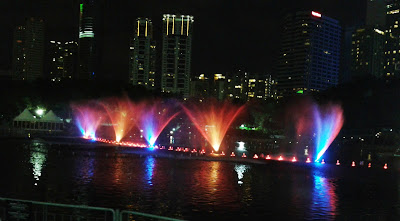 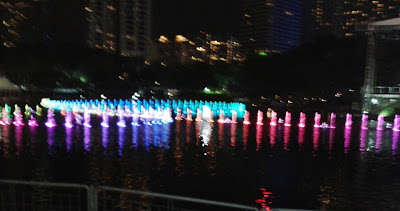 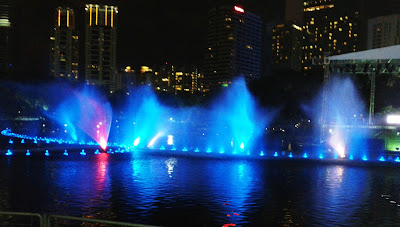 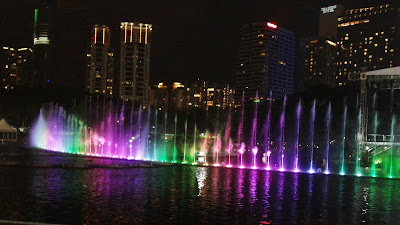 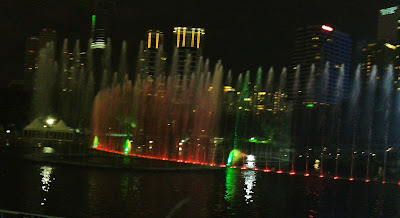 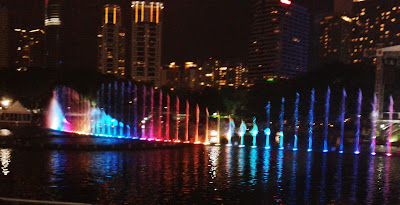 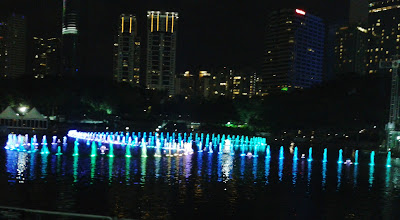 After dinner yesterday at the KLCC I venture outside and watch the display of the newly choreographed fountain. It was a show of dancing jets of water to the tune of the music, indeed a magnificent sight to watch and wonder. Above are the scenes that I had captured with my cellphone camera. I did not brought along my DSLR and had to do with the cellphone camera and it did turn out as great. I would go again to take those magnificent sights of the fountain in the evening light the next time I am at the KLCC. Enjoy it folks.

Have a nice day.
Posted by Pak Idrus at 9:57 pm No comments:

It was a beautiful day in mid-May. I decided to take a trip to the oldest part of the city, the area where the two tributaries of the Klang River meet. It was around this vicinity the city of Kuala Lumpur starts it humble beginning in the middle of the nineteen century. Then the country was ruled by the British colonial authority. At the confluence landmass just before the Klang and the Gombak rivers meet there is a beautifully architectural mosque build at the beginning of the twentieth century. It was build for the Muslim who lives around that area then, as well as the official mosque for the capital of the country Kuala Lumpur. It was officially open by the then Sultan of Selangor in 1909. So that made this magnificent mosque more that a hundred years old. It remains as the main mosque in Kuala Lumpur until a new mosque, the Masjid Negara was build in 1965.  Even after that the Masjid Jamek mosque as it is known still play a significant role as a place of worship where folks congregate for their daily prayer as well the weekly Friday Prayer. Come Friday this mosque would be crowded, with some worshipers had to do the praying on the payment outside.

As can been seen in this image it is as magnificent as it was first build in the days where there was no skyscrapers or tall buildings around it. By itself it was a work of art and a masterpiece architecture that continue to draw worshipers and visitors alike to it till these days.

I was there last Wednesday and walk the ground again and saw its at close range. Since it was before prayer time it was easy to go and have a look at the nooks and corners of the place. I saw the floor area is well-kept and clean just like new. The whole floor area was of marbles and looks shining clean and cool to sit on. That is why I felt that marble or ceramic tile is the best material for the flooring of mosque in this part of the world where the climate is always humid. It is easily kept clean all the time by just sweeping and mopping it. The same cannot be said about carpet. I believe that carpet is not suitable as flooring material  in mosque since it is not possible to clean it all the time. Besides carpet harbors millions of dust mites and could not be removed by vacuum cleaning. It could only be clean and rid of the dust mites only by drying it in the sun which is impossible to do for a wall-to-wall carpet. Even with a smaller carpet to me it is almost impossible to dry it in the sun all the times. So I hope planner of mosque in the tropic should not put carpet as the flooring material but use marble or ceramic tile instead.

While there I met a few tourists from as far as Morocco who came to wander along admiring the architecture of this magnificent old mosque; the Masjid Jamek of Kuala Lumpur.

Of Fruits and Health... 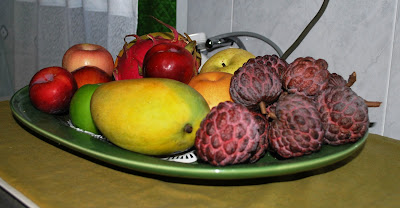 A bowl of fruits. The Buah Nona [Custard Apples] are from our own tree.  Read this about  why the Buah Nona is so special Me. 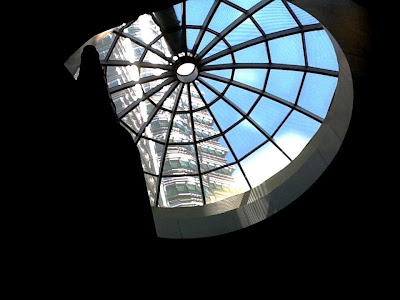 The above image was taken yesterday at the KLCC using an iPad camera. Enjoy it folks.

Labels: One of those days..., Photography 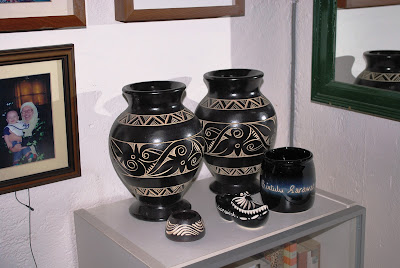 Above are the Sarawak Potteries in my collection. It is a work of art of the Sarawakian. Unique and only could be found in that state. No other states in Malaysia produce such craft. For it uniqueness folks who visited Sarawak would surely come back with at least one as souvenir. I fell in love with it when I visited Sarawak for the first time in the early seventies and always came back with a few pieces. And when I was working in Sarawak from mid 1986 to 1989 I visited many workshops in and around Kuching as well in Sibu where the make this wonderful works of art. Along the years I bought many good potteries and it now graces my home, a collection that I would not part with. To me it is priceless now. Such a beauty well crafted with design of the local culture depicted on each one of it. Since it is handmade I do not believe there are two of a kind, thus making each a unique piece indeed. It is sort of a collector's item to be treasured and enjoyed. 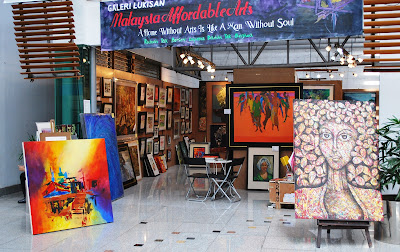 May 2, 2012 was a beautiful day. I had planned to go to the KL Sentral. Just before ten in the morning I drove the Honda to KLCC and after parking the car at the basement walk to the LRT underground station there. It was midmorning and there were not that many people at the station. I use the Touch and Go card to enter. In mere minutes the train arrived. I got in, found a seat and sat while the train whizzed away making a few stops. In less than fifteen minutes it arrived at the Sentral Station or the KL Sentral as it is officially known. It is the communication hub of Kuala Lumpur where one could get to anywhere in the city using the Public Transport like the LRT, Bus or the commuter Train. I had wanted to buy a gadget for the car and found that it is sold at the Plus shop there. After getting what I came for I decide to wander along in the vast complex. The place is already thronging with folks doing their own business. In the past I did not venture to the shopping area of the complex. I soon found there are many shops, banks, restaurants and stalls selling souvenir items to cater to the traveling public or to those who frequent this place.

I wander and wonder along and to my surprise saw a shop that sell paintings. Since I love arts I decided to take a closer look of it and found that it is a sort of an art gallery.  While I was browsing and admiring the various paintings a man came out and greet me. He told me he managed the place and that he is an artist himself. It is an art gallery where paintings of many Malaysian artists are displayed for sale. I soon found there are many paintings of well-known Malaysian artists as well from some up-and-coming one on displayed there for sale.

The manager Zaidi Yusoff from Kelantan said that it was a collective idea to open such gallery there. We soon got into talking and I found he was such a friendly person well-spoken in things arts. Since I was formerly working with the Ministry of Culture almost every names he mentioned were our mutual friends. With that we became friend. We sat and continue to chat on the world of arts and exchange ideas of how artists could get exposure to the marketplace. I  believe this gallery if given better exposure would became a hub of sort where folks could buy good painting at a reasonable price.

This Art Gallery is call Malaysia Affordable Arts and it is situated at the Arrival Hall, KL City Air Terminal, KL Sentral. The telephone number is +6016270545. The website is here and the e-mail address is malaysiaart@gmail.com. So folks if you are interested in getting a good Malaysian painting do make a visit there and I am sure you would be able to get a good collection at a bargain price there.

[Please click on image to enlarge]
Posted by Pak Idrus at 9:51 am No comments: