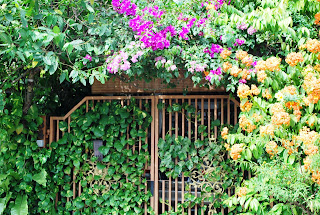 Above is the image of the gate of our home. For wanting to have a rural look I decided to plant many flowering trees in front the house and that includes the creeper plant that folks call the 'money plant'. Enjoy it folks. 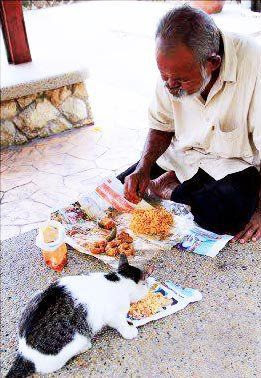 Someone posted the image above on Facebook and because the message is so beautiful I had shared it on my Facebook wall as well. And now for the benefit of my blogger friends I am sharing it here too. Its the beautiful people like that man in the image above that made our world such a great place to live to enjoy life. It is being human as a true human being that touches the hearts of us all. Give whatever we could so others including the other species on our planet are able to continue to enjoy life; for without the other species lives on planet earth would not be as beautiful as we all would want it to be. 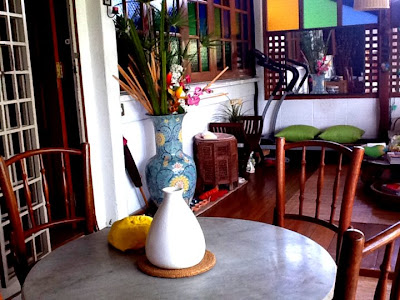 It is a beautiful day in June, sunny with patches of white clouds, a great day to get out to enjoy nature. As for now I am sitting here writing about the Serambi as in the image above. Serambi is a patio but it has its differences. In a traditional Malay house the Serambi [patio] is build just in front of the house whereas the patio in a modern house could be anywhere the owner would want to built it. In a friend's house in Boston I saw the patio at the back behind the kitchen. That is the difference. The traditional Malay house is always build of hard tropical wood and most of the time the Cengal is use for all the poles. It is built above ground thus there is always steps leading up in the front of the house and another one at the back. It is difficult to see a truly traditional Malay house these days. It is sort of a dwindling scene, sad but true. My generation lives in the traditional Malay house and for that I fell in love with the Serambi. It is a special space in front of the house before one enters the sitting area. It is an open space with wooden railing and do not have wall. In a way it is an area outside the main house but yet part of the house. It is in the Serambi that folks would just sit to chat or yarn during free time without disturbing those in the main house. Because the Malay traditional house is raised above ground the house is always cool especially the Serambi thus there is no need for fan to cool the air like now. When we move into our present house there was no Serambi so I decided to have it specially built with lumber. Today my Serambi as seen in the image above is a space where I spend my time to whiled the day away, at time entertaining guest who come a visiting or just daydreaming. The Serambi is indeed a space that our forefather creates with wisdom.

The Blue House of Love... 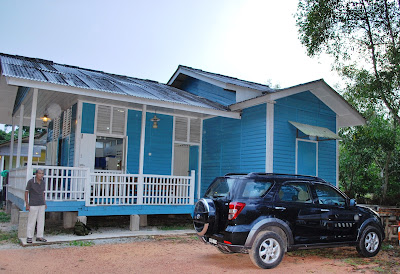 The Blue House; so what is so special about this Blue House. I do not know why it is call the Blue House but I can say that it is situated not that far away from the blue sea where the sky above is always blue. Perhaps that is why they name this house of love the Blue House. Anyway I like the colour blue for it is always associated with peace and tranquillity, an atmosphere that allows one to enjoy life in all the colours of the rainbows. So what is this house is all about.

Well let me tell the story my way, the way I know best. It may differ from the version of the owner of this gorgeous house under the sun. But it does not matter for this is my story. Let me digressed a bit. In July 2010 I was in Kuantan and for no obvious reason decided to go and have a look at the house of my late auntie and uncle in Galing, not that faraway from the hotel where I was staying. With my nephew we drove to the vicinity of the house and found that many buildings had been bulldozed and the land been filled with laterite soil. There stand two broken-down buildings that were once the grandeur of buildings in this part of the kampong. The houses where my late auntie and uncle and my late granduncle* live from the time this corner of land near a tributary of the Kuantan River was developed. In those days it was easy to get to the house from the Jalan Baserah but now one had to wind one's ways to get to it. Anyway we were there that day and what I saw made me sad indeed. That two houses are been left to rots or left without repair. Despite its condition I saw there are people living in both houses. I took some photos of both houses and posted it on my Facebook wall with a note hoping that someone would take step to preserve these heritage houses and saved it for the future generation. Soon there were many comments on my wall. Most are with positive thoughts and I like it. 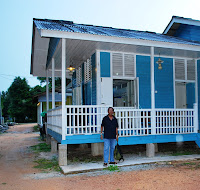 Years later I saw a posting of the Blue House in a relatives FB wall and eventually found that they had indeed took apart that old houses and reassembled it at a new site. I was delighted with that happening. They have indeed saved that old house for the future generation. I was hoping I would get to see it whenever I am in Kuantan. Then the opportunity came knocking almost on my door...

It was a beautiful day with clear blue sky but as usual at this time of the year the weather in Kuantan was hot and humid. I sat in my hotel room in the Vistana Kuantan listening to a German TV program in German while surfing the Net. With that kind of atmosphere I felt like been in Germany in summer where I once live. Outside the weather look great just like summer in Germany. While on Facebook I notice a posting from one of my niece saying that she is at the Blue House now. I then post a comment saying that I would love to see the Blue House and appreciate if she could pick-me-up at the hotel since I did have a car with me. Just before 4PM on that gorgeous Thursday afternoon I received an SMS from her saying that she would come over to fetch me up in about thirty minutes. I then dress up and went to the lobby to wait. She arrived with her dad Azhar a retired teacher. I hop in and they drove away to our destination, the Blue House. On arrival met my cousin Nor, Azhar's spouse. We sat to chat over Tea.

There was so much to talk about but as usual in a situation like this time passes by fast indeed. Hardly have I known it was almost six thirty and I almost forgot that I had a dinner date at seven. Mesmerized by the way they had reassembled that old house and the green surrounding that enclaves the house I got lost of the tread of time. In fact I had overstayed their hospitality.  A quip from Azhar brought me back to reality that it was time to go. They then send me back to the hotel.

Well folks in the story of my life whatever I wanted to see or get, I always get to it in one-way or the other. It just likes destiny one talk about in the journey of life. One can never tell what going to happen next. I had decided to just get to Kuantan and take it easy but never for a second thought that I would get to see the Blue House that soon. But then life is like that and thanks to the Internet communication became a means to an end. Facebook was the mean and the end that Blue House. Amazing isn't it what life had to offer in this beautiful world of ours.

Thanks Nurul, thanks Azhar, thanks Nor for making my day; that Blue House of yours is simply gorgeous, a gem indeed.

Below are the two houses before it was taken apart and reassembled as seen above. These images was taken on July 6, 2010. 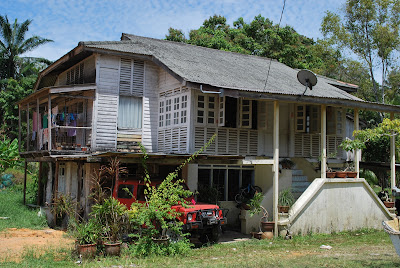 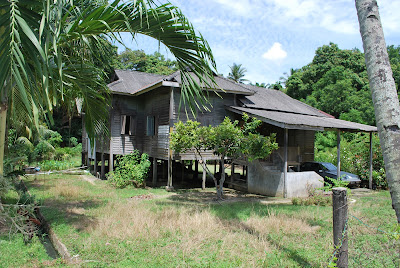 *Note: The granduncle mentioned above is Abu Bakar bin Mat, the younger brother of my maternal grandmother Mariam binti Mat. 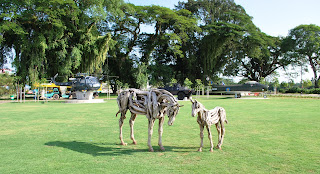 I was in Kuantan for a short holiday. On the second day and on a beautiful morning I decided to go and have a look at Pekan, a small town just 50 kilometers away from Kuantan. The last time I went to this town was in the year 1989 when I was working in Kuantan. Pekan is the Royal Town of Pahang where the royalty live. It was once the capital of the state of Pahang until the capital was moved to Kuala Lipis and then to Kuantan.

Although the town has grown from a one-street township into many streets I found that it is still a quiet town with a slow lifestyle. This old street as seen on the left where shops made of wooden material still look as great as it first lined that street is as enchanting as ever. Just opposite it is the Pahang River and  a new Waterfront park has been build where folks could spend their leisure times in the early part of the morning and the evening when the weather cool down.

With my nephew driving I decided to visit a few places that I felt I should photograph. I wanted to have a look and photograph one of the oldest mosques there, the Sultan Abdullah mosque which was build during the colonial era. Build in 1929 it is a beautiful mosque with great design but to my surprise that mosque look like it is no longer use and has been left to rot. See image on the left where plants have already start to grow on the building. A new mosque has been build nearby and I believe it is in used now. I simply could not understand why such a magnificent mosque of historic significant has not been preserved.  At least it should be preserved or spruced up as a historical site. After all it is the first mosque of such architecture build in the state of Pahang. The Masjid Jamek mosque in Kuala Lumpur that was build ten years before is still been use. Well I do hope the authority in Pahang would restore this once magnificent mosque to it former glory. 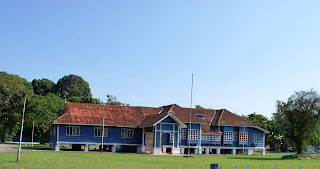 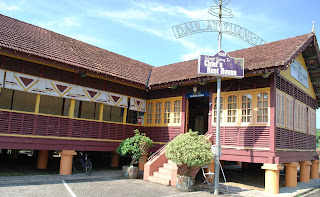 Pekan has its kind of charms and is a small town worth a visit from time to time. I had managed to take some images of old buildings there and sharing it here for all to see and enjoy. Enjoy it folks.

Have a nice day. [ Please click on image to enlarge]
Posted by Pak Idrus at 2:40 pm 4 comments: 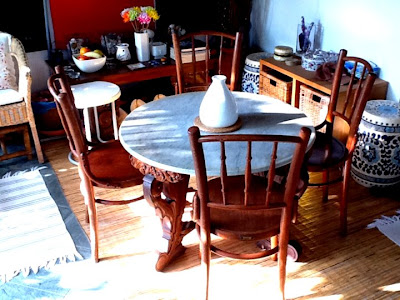 Above is an image of my patio as the sun set this evening. The sun ray, the shadow and the elements are in harmony. Turning that little space of mine into a great place to sit, have coffee and whiled the time away. . Enjoy that image folks.