The Demise of Louis Michael Sellier of Seattle...

We are in a shock of this news. Folks it is not easy to write this and like me his friends all over the world would want to know. I had to gather strength to write this as soon as possible. Let me begin like this, our friendship start years ago in blogsphere. He use to visit my blog and often posted comments. We then graduate to communicating by emails. We exchange notes and discuss many things about living. Been almost of the same age; He was two years older than me, we eventually became close friend, more like a relative than a friend. I told him to blog and eventually he did. This is his blog Hopscotch. In the summer of 2008 we met in person in Seattle. Asmah, our daughter Lin and I met his wonderful spouse Elena and we had a great time with them while visiting Seattle. Our contact was never lost even a week, email and later on Skype made the contact much easier but when the contact was lost I began to worry. Then friends too were worried; It not like him not to reply to email, so I continue to write and got a friend Rita Ho in Seattle to help but to no vial. I look at all his posting in his Blog hoping to find an email of his kids but still there was no email to be found. I then thought of writing to a stranger Blogger who posted comment in his blog. I got an instant reply from blogger Guanaguanare of Trinidad that he too was worried and has lost contact. He like me did a frantically check on the net and then he gave me the URL to the blogger Richernandez; the Sweetlime. Reading it I felt the pang of sadness of the death of Louis but as yet to get a confirmation. Fortunately there was an email address of his daughter in that blog posting. I wrote to her immediately and this is part of her reply
''Regrettably, terribly, it is true that my father passed away on March 16 as a result of a fall he suffered while visiting friends in Arizona. So very unexpected, and all the more tragic an accident because of my mother's passing earlier this year''.
That confirmed. I told the others, among the many this Blogger Ee Lynn and now writing this. Well folk we came and then we go, for that is part of living. Louis was a good man and more than a friend to Asmah and Me and we do miss him dearly. Good-bye my dear friend, May you Rest in Peace. Amen.

[Please click on the relevant URL I posted to read more]
Posted by Pak Idrus at 11:08 am 21 comments:

Woke up to another beautiful day in April and went out to clean the patio. Then sweep the fallen flowers and leaves on the pavement outside. It is normal to see leaves and other rubbish that had fall and left overnight scattered on the pavement. It looks so untidy. Cleaning it is sort of my early morning ritual, to get the front of the house clean. I actually like doing that. While sweeping I hear birds singing and chirping happily as it hops from branch to branch and from tree to tree. It was really nice to see and hear those little birds making it morning melodies. At these early hours I could smell the freshness of the morning air in the cool of the morning. It is already the end of another week in April which is normally quite dry but it looks like the weather has change. It now rain with thunderstorm and lightning in the afternoon. In a way it is good, it adds nitrated to the soil and swept the drains clean and the river nearby swell with freshwater, sort of a general cleaning of the surrounding. Its nature way of recycling the atmosphere and continue giving us a beautiful weather everyday. I finished doing the front of the house and then move on with my other morning ritual. I felt good today and continue to enjoy the freshness of the morning air.

I then went to get some cut apple for the elusive squirrel that frequent my patio; for its morning meal. I place the apple in the usual place in a plate. In a while it would come and enjoy the fruit like it does everyday. 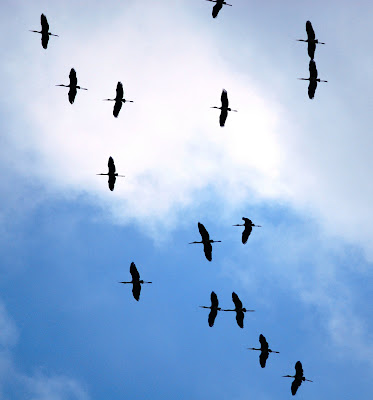 A few days ago the sky above my house was clear with blue sky and I saw a flock of migrating storks flying in formation up above the sky. I went into the house to get my camera and fixed a telephoto lens to it and then went out to get a few snaps of those flying birds. When I went out and try to take a few images of the birds I could not click my camera. On checking my camera I soon realized the memory chip is not in the slot. I then rush again into the house and came back with the memory card in the camera to get as many picture as possible. At that moment in time the birds has gone far away and I could only see it as some small dots in the sky. I waited and hopes that it would return to the front of my house and to my delight it did came back and fly happily. I then took as many shot as possible and above is one of the flying moments that shows the storks in action about the Ampang Jaya sky; a magnificent sight indeed.

Well it does made my day.

Folks have a nice day too. [click the image to enlarge]

Labels: Nature, One of those days... 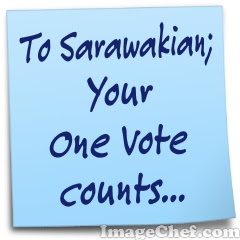 Sarawak goes to the poll on April 16, 2011 to choose their State Assemblyman for the next five years. Please vote with wisdom, for the future of the state is now on your vote.
Have a nice day.
Posted by Pak Idrus at 11:34 am 8 comments: 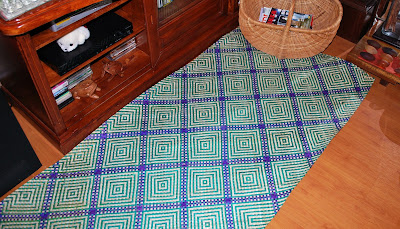 It was a beautiful Saturday afternoon so we decide to go window-shop and have dinner. I took the Honda and drove to one of our favorite mall, the GE Mall at Jalan Ampang. An upmarket mall which is not that crowded and there are many restaurants that we could indulge ourselves in foods of our choice. On arrival we found there is a Craft fair at the lobby. I love traditional handicraft and straight away went to browse the many stalls that was setup there. A friend of our youngest daughter was running the Indigenous folks stall. This stall sells genuine craft made by the various indigenous people that live in the jungle all over the country. Their craft especially those intricate mats and woodcarving are unique and I consider it to be the work of art. We end the visit with eventually buying a few pieces of those mat and a few pieces of the woodcraft. The image of one of the Mat I bought is as shown above. It is made by the Semelai an ethnic group of Kg. Bapak, Post Iskandar, Tasek Bera, Pahang. After making the buys we went to have our dinner at the Kopitiam on the third floor. 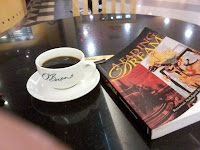 After dinner my spouse and our daughter decide to do some shopping and since I had other interest I went to visit the MPH Bookstore. While browsing there I found a book entitled 'A Fading Dream' The Story of Roeslan Abdulgani and Indonesia' which was sold at a seventy percent discount. After having a glimpse of the content I decide to buy it, then went downstairs to have coffee at the O'Brien fast-food kiosk at the lobby level. With that steamy hot coffee by my side I read the book and found that it was sort of a historical book of one of the giant of Indonesia. This book was written by non other than his own daughter Retnowati Abdulgani-Knapp. Actually before reading this book I did not know there was such an important figure in the era of pre independence Indonesia since this man was never in politic in that sense of the word but more been the man of the day in the government. He often act as adviser to those political leaders from Sukarno up till the present Indonesian leaders until his death on June 29, 2005. From what I read this Roeslan Abdulgani is indeed an important man in the history of Indonesia. In a way he was like Ghazali Shafie in the Malaysian political scene. This book gives the insight of the culture of the Indonesia people during the colonial era and the fight for independence of Indonesia. To me finding this book was like finding a new source of the history of Indonesia, a country of 250 millions people, the biggest democracy in this part of the world. I believe that Indonesia would be a country to watch in the coming years and would play a significant role in molding this part of Asia.