Of Dog, The Society and Wisdom.... 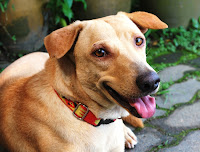 
In the mid 1930s, a member of the Kelantan royal family and his sister had a disagreement over him keeping a pet dog. She felt that dogs, and in particular their saliva, were polluting according to Islamic law. The issue quickly became a matter of public debate with Islamic experts in the state weighing in with different opinions. In order to resolve this issue, the Tengku (the dog owner) called for a public council of debate (a majlis mudzakara) with both sides having the space to present their arguments regarding dog keeping in Islam. In January 1937, the mudzakarawas held in Istana Sri Cemerlang and attended by two thousand members of the public. It was reported to be the event of the year for the people in Kota Bahru and it continued to be the talk of the town for many years to come. On team pro-dog were ex-Mufti Wan Musa Wan Abdul Samad, Haji Abbas b. Muhammad Taha, a qadi from Singapore and Burhanuddin Muhammad Noor1, a young man who studied in Delhi and Aligarh. On the otherside were the mufti of Kelantan Haji Ibrahim bin Haji Yusof, chief Qadi Haji Ahmad bin Ismail and leading Islamic scholars and members of the Kelantan Islamic council Haji Abdul Manan and Haji Abdullah Tahir. The two teams presented their arguments drawing from a range of sources including the Quran, the Prophet's (PBUH) hadiths and tradition and studies on Islamic jurisprudence. Both teams composed of highly learned scholars with extensive Islamic training abroad and locally. At the end of the debate, the Sultan did not declare a winner but left the people of Kelantan having heard both sides of the arguments to make their own informed decision2.
In the meantime, the Tengku wanting to have a clearer outcome submitted a query to the Fatwa Committee of al-Azhar in Cairo regarding this matter.  In May 1937, the Syaikh of al-Azhar issued a fatwa affirming the permissibility of dog keeping3. While the matter remains controversial in Kelantan, the differences in opinion were accepted.


I bring this historical moment up not to be seditious, but because it illustrates a time in our country where there was space for a public debate on such religious matters. Differences in opinion regarding Islamic jurisprudence were acknowledged and the public given the space to make their own decisions after weighing the arguments before them. Indeed, this space for discussion and active knowledge seeking is very much part of the Islamic tradition since the time of the Prophet Muhammad (PBUH).
Today, in Malaysia, there is little room for any differences of opinion when it comes to Islam. If one does not subscribe to the dominant viewpoint, then one risks of being labelled kafir or thrown into jail.


This week we witnessed a Malay dog trainer arrested by the police with charges of sedition because she had a view different that the majority regarding dog handling. For putting up a video of Hari Raya greeting featuring her dogs with the background of takbirraya, Maznah Mohd Yusof was deemed to have insulted Islam. Online, member of the public threw hurtful, demeaning and violent words at her, some even threatening her life. With the faceless mode of interaction through social media, people seem to have lost their humanity and compassion for another fellow human being. Many of the angry commentators kept insisting that Maznah's action insulted Islam because dogs are forbidden in Islam.


There is actually nothing in the Quran about dogs being haram and in fact, references to dogs in Quran are in positive light. In Surah al-Kahf, a dog was companion to a group of young believers whom Allah protected from an evil ruler by letting them sleep for many years in a cave.  The dog is described as guarding the believers "stretching forth his two fore-legs on the threshold" (18:18). In Surah al-Maidah (5:4), Allah grants us permission to eat the meat caught by hunting animals (there does seem to be any dispute that the reference to hunting animals include dogs). Among the different Mazhab, there are differing views on Muslims' handling of dogs. However, even in the strictest Shafie school of thought, while the saliva and excrements of dogs are deemed najis and one is required to conduct ritual cleansing (samak) after touching these, keeping or holding a dog is not haram nor sinful.


I don't want to be accused of making up my own fatwa, so let me quote a report published by JAIS (the Selangor Islamic Department) in 20104 : "Menyentuh atau memegang anjing tidaklah berdosa atau menyalahi hukum Islam." So there, dogs are not haram and it is not a sin to handle a dog. Many Malays grew up believing dogs as haram and to be avoided at all cost but this assumption seems to be based more on a cultural than religious conviction.


The conflict this last week would have been a good opportunity for learned Islamic scholars in Malaysia to discuss the differences of opinion regarding dog handling drawing from our rich Islamic scholarly tradition. But instead, this issue seems to be driven by a political agenda. It all seems to be a big performance of who can show they are protecting the Malays the most. Issues are blown out of proportion to create apprehension in the community. It is alarming when national leaders chose to further flame the discord rather than promote tolerance and compassion.


Ramadan is a month of reflection. It is also the sacred month when our ultimate source of knowledge on Islam was bestowed upon us in the form of the holy Quran. As Muslims, seeking knowledge is part of our ibadah. Opening spaces for discussion and allowing for diversity of opinions will not shatter but instead strengthened our faith as a thinking and knowledgeable ummah.

*Rusaslina Idrus is a teacher and academic researcher based in a local university.
* This is the personal opinion of the writer or publication and does not necessarily represent the views of The Malaysian Insider.