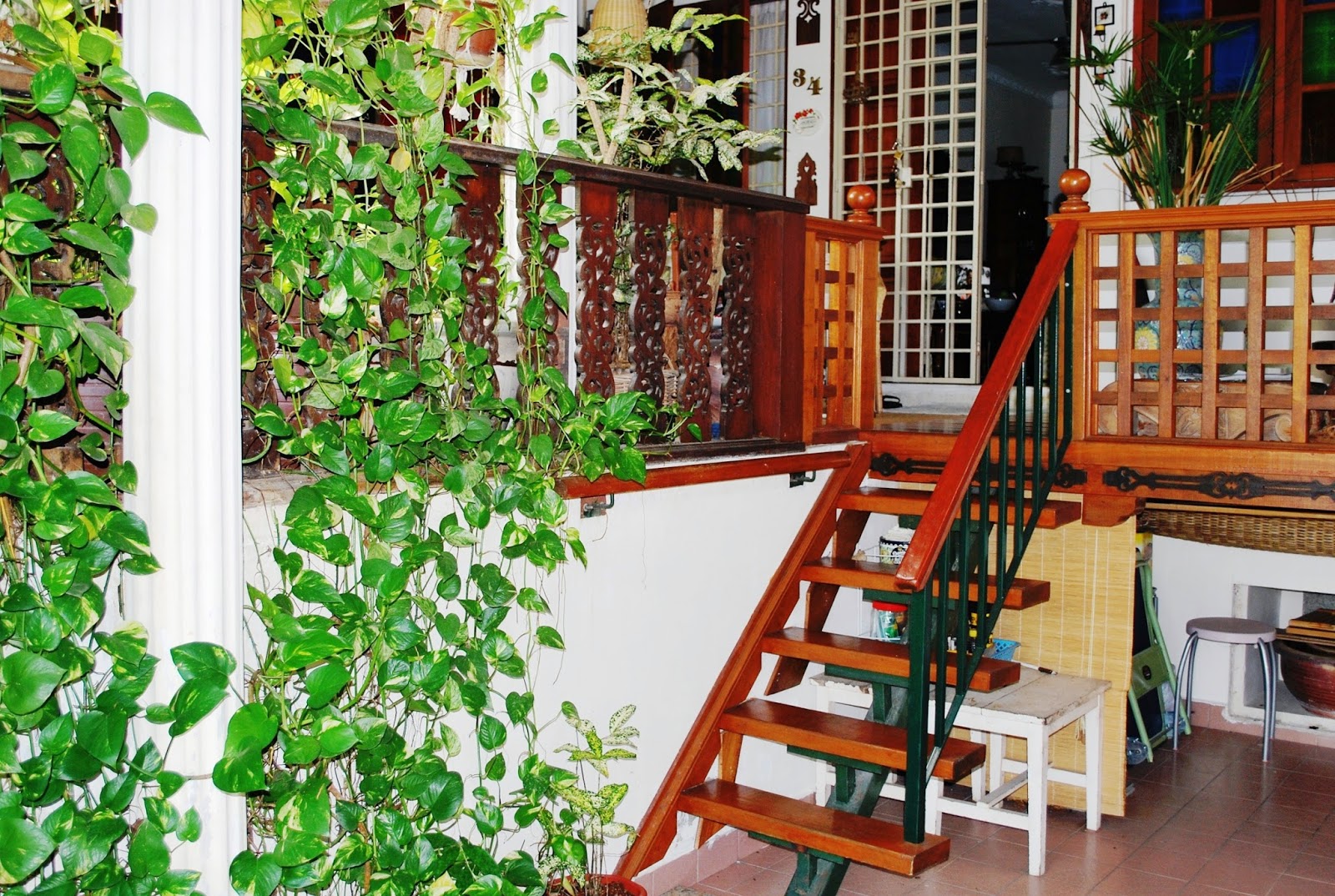 When I first bought my house in Ampang Jaya it was all brick and mortar. I did not like it so over times I tried to change it to a more wooden house. It was not easy and with the budget I got over times I did it and now it no longer look like the original house that I bought in the early seventies. I turn my concrete house into sort of a wooden house and create a small garden in front and at the backyard. There is a huge bush of all kind of greens in front where the gate is. So my whole house is like a little garden and it does kept the house cool. I no longer slept in an air-conditioned room to keep me been dehydrated and thus healthy. We all must give due respect to the greens for without the green the whole living species on this planet would perish. Why you may ask. The answer is that as we all know pretty well that all living species need energy to live and that energy comes from the Sun. It is the Plants that convert that Sun's energy into foods that we could consume to get that energy from the Sun. So folks just a gently reminder; plant greens around your house or anywhere and give due respect to it for without it we all would be banished from this planet. 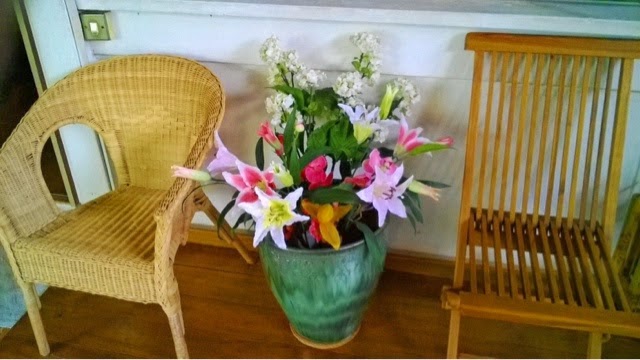 Well for today I would just post this image of my patio; it a place where I would just sit to ponder. This image is taken with the Nokia Lumia camera. I am amaze that with such a tiny camera of the cell phone the image is so good.

Labels: An event., Science and Technology, The Internet 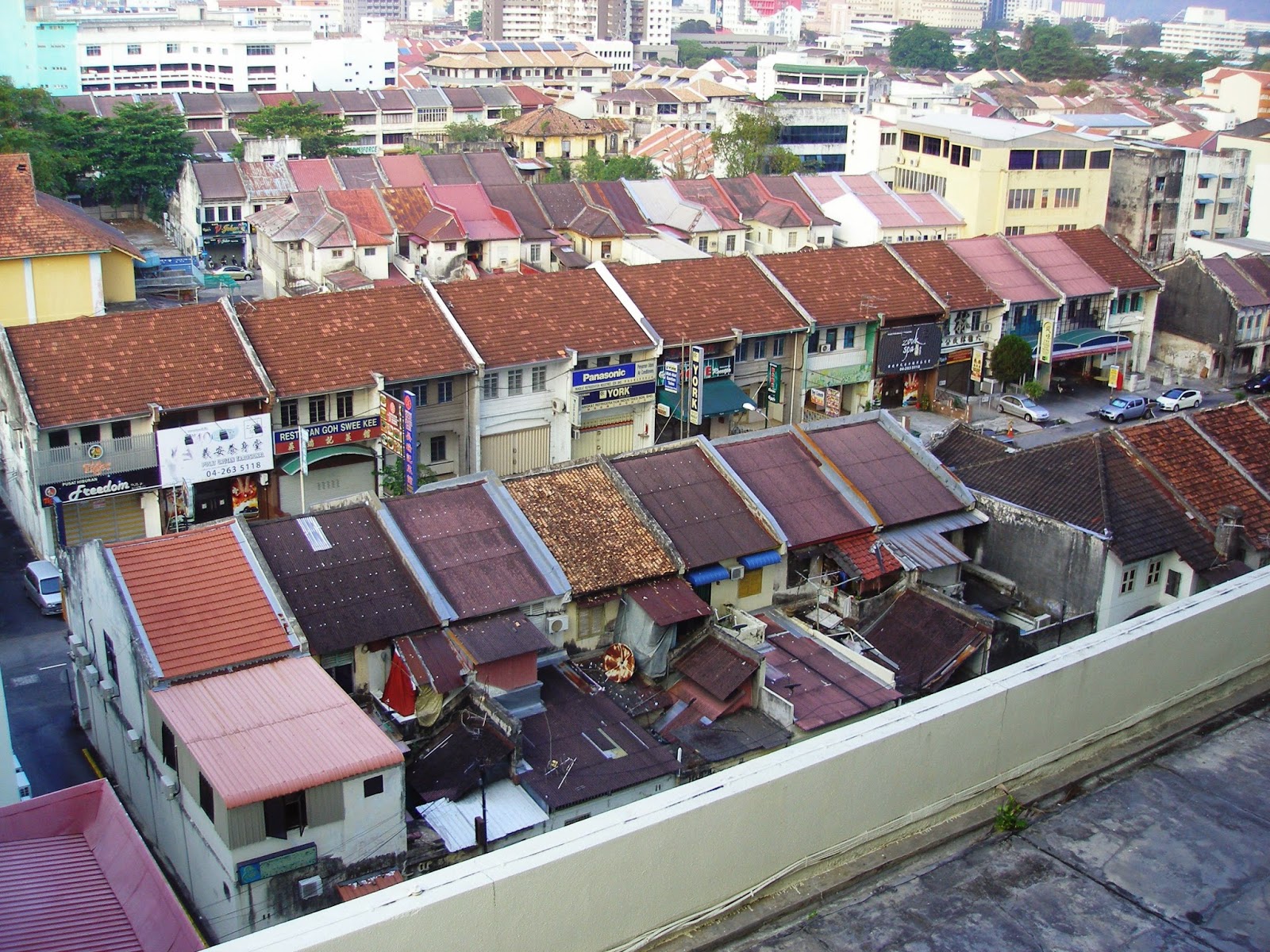 I was in Penang at the end of last month. While playing tourist there I photograph many scenes of George Town. Most of the buildings in the old part of town remind me of my growing up period in my home town of Kuantan. I was happy to see all those old buildings still standing around; row and row of it with a few in between modern buildings that have been built in recent years. We call these rows of shop houses as pre-war buildings as most of it was built before the Second World War. While I was at the 6th floor of the Hotel room that I was staying I took a picture of some old building from the window of the room. This is indeed an opportunity to get a rare shot of the row and row of the shop houses from up above. It looks need and well planned. I grew up in one such shop in Kuantan where my father had run a restaurant. During a period where there was hardly any fan let alone air-conditioning, the interior of the build was always kept cool. It has ceiling made of hardwood and planks. With a high ceiling it allows the hot air from below to move upward and disperse through the vent above. 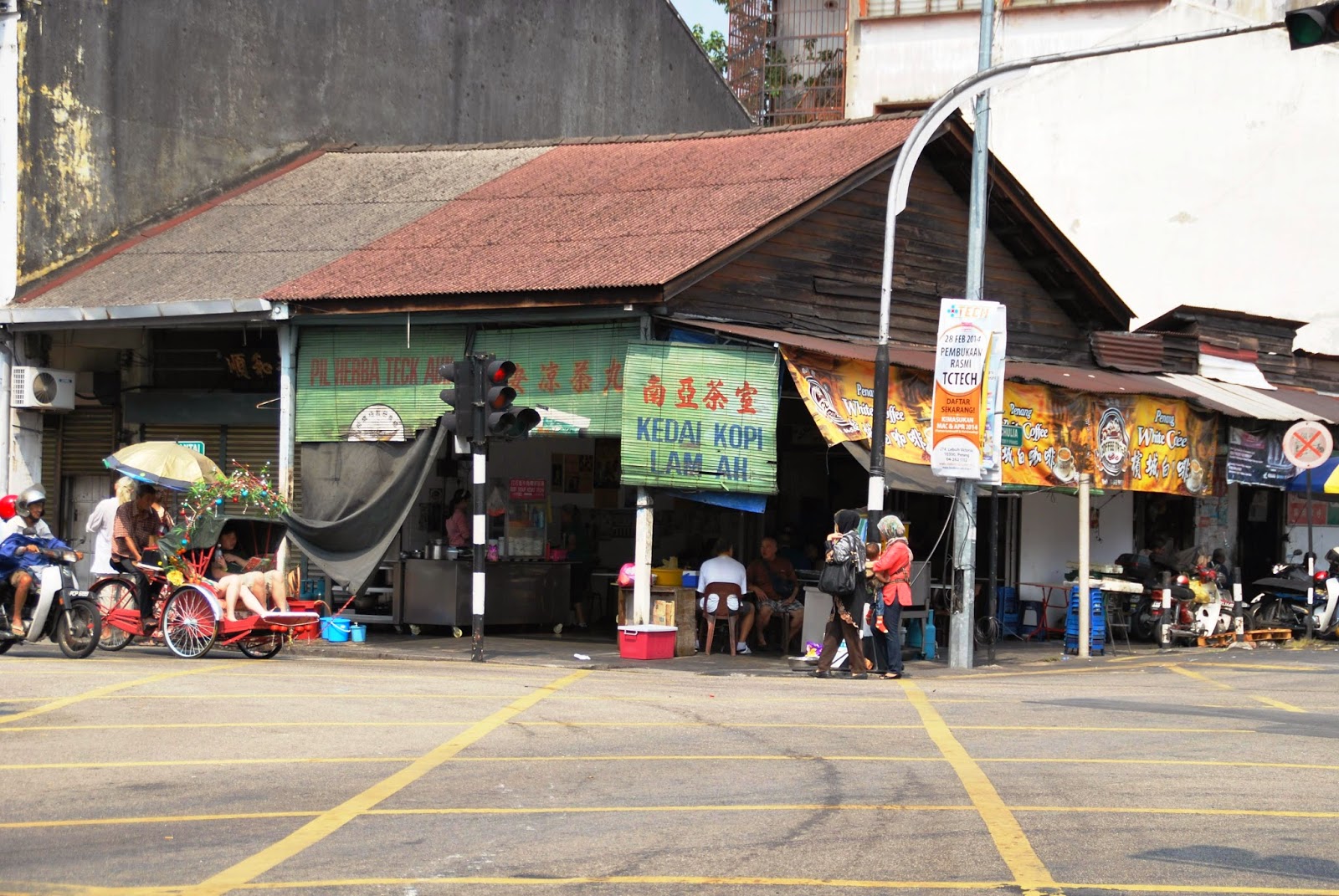 While taking a slow walk around the town I came across an old building that is still standing on one corner of the street, doing business as usual. The one storey build look old and I believe it must have been built about a hundred years ago. 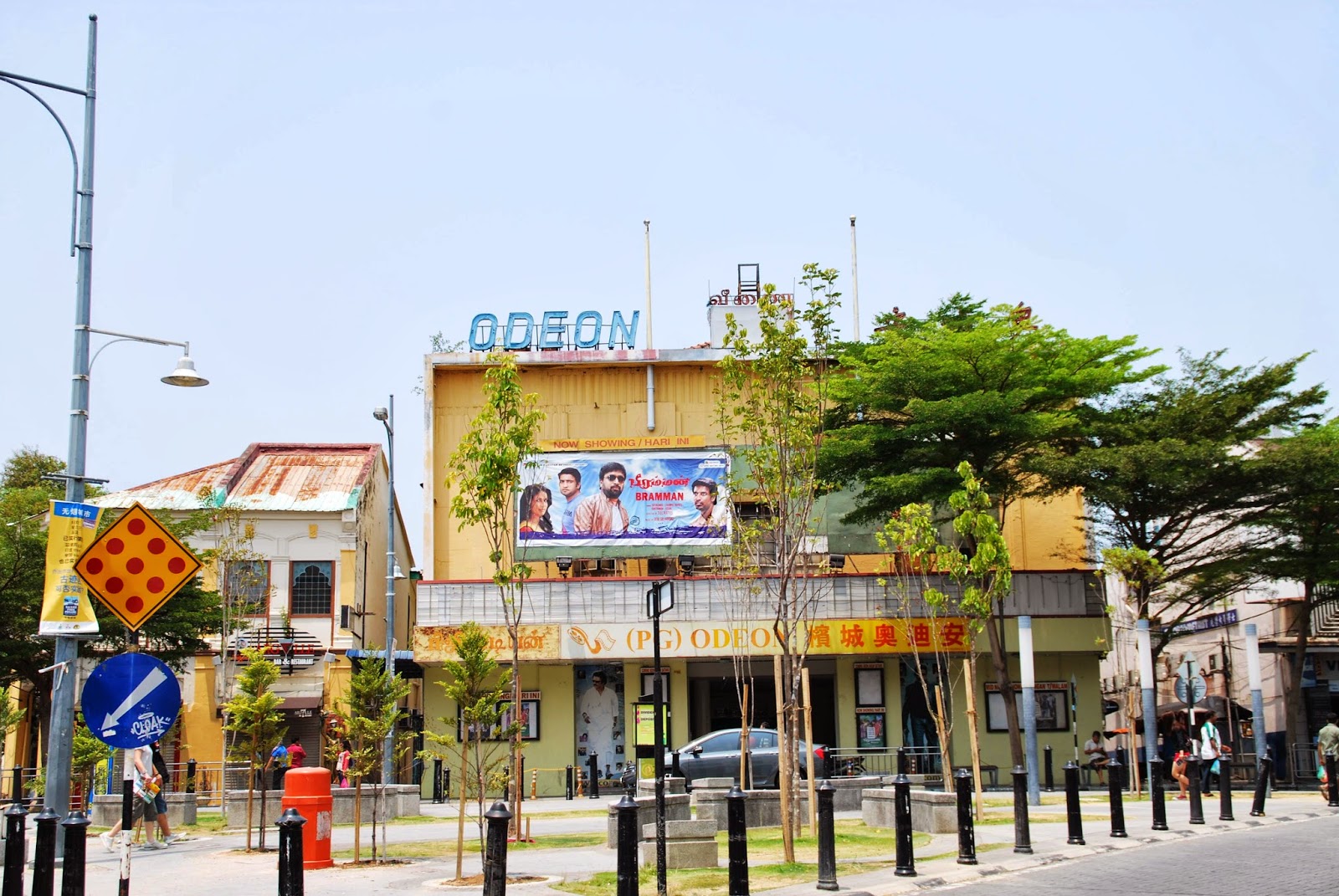 As I move on I saw a familiar signage that show the Odeon cinema.  During my childhood growing up in Kuantan there was a cinema there of the same name that I often goes to watch movies. Here in one corner of the old section of George Town stood an old building call the Odeon; nostalgic  indeed.

A place call ChinaHouse in Penang... 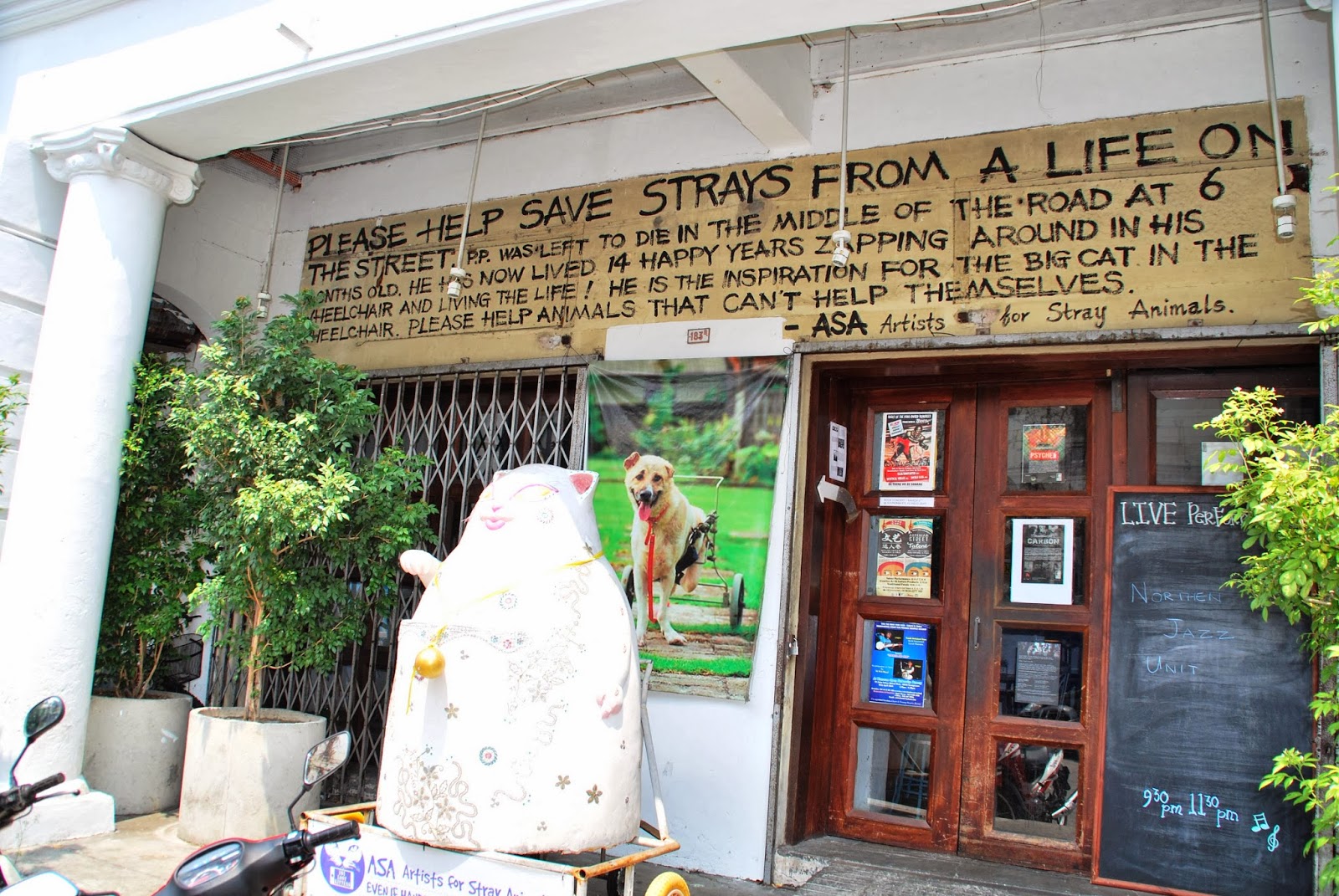 While in Penang recently I came across this building with a huge banner hung in front of the entrance. I read it and since I love animals I decided to give a donation to the charity. I enter the building and saw a Bar. I ask the person there where I can give a donation for the Cat's Charity. She said I had to walk to the Cashier and hand it there. I thank her and with the camera dangling I walk and soon found that the shop is long and that it consist of many kind of eateries. I got to the other end where the cashier is and hand her my cash donation. She give me a receipt for the donation. I then ask their permission to take photo of the place and they say to just go ahead. 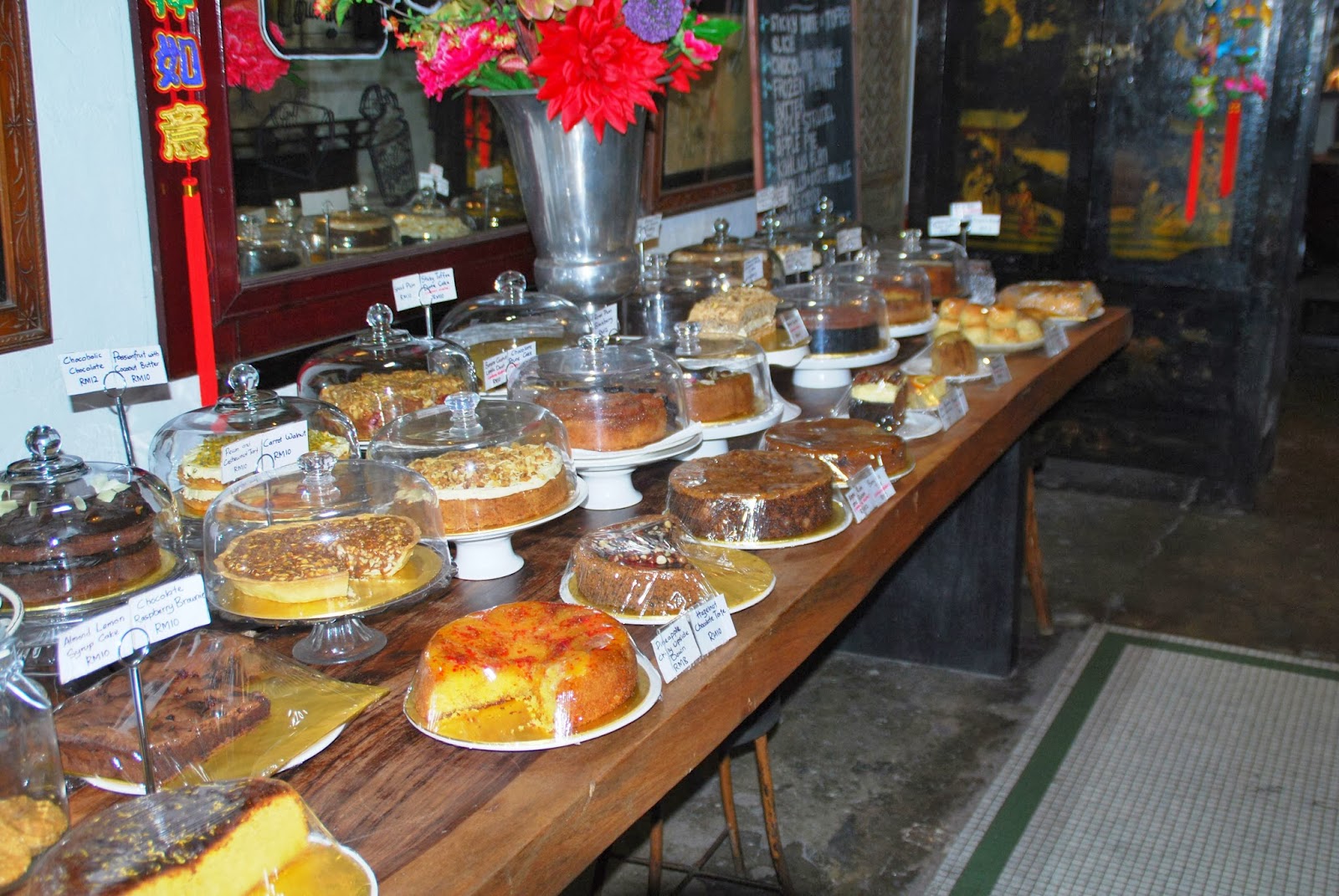 I explore the shop and took picture of what I thought were interesting. I felt for the whole concept and love the place but did not sit to enjoy those tempting cakes. Telling myself that I have to come again to sample the cakes or perhaps have lunch here with friends. Those folks who had planned this joint were real creative in that they have taken the food outlet to another level; a blend of so many eateries under one roof. There is a Bar at one end where one could enjoy the music and whatever drink, there is a long dinning area where one could enjoy dinning in an ambiance of tranquillity. Then that row and row of cakes that looking at it alone would want you to sit and enjoy it with a cup of coffee or tea. There is a garden of sort that turn the ambiance into an atmosphere of coolness; taking away that hot and humid weather of the outside. I soon found out that this place is call ChinaHouse. One can enter the building either from Lebuh Pantai or Lebuh Victoria. Below are some scenes of the interior of the place. 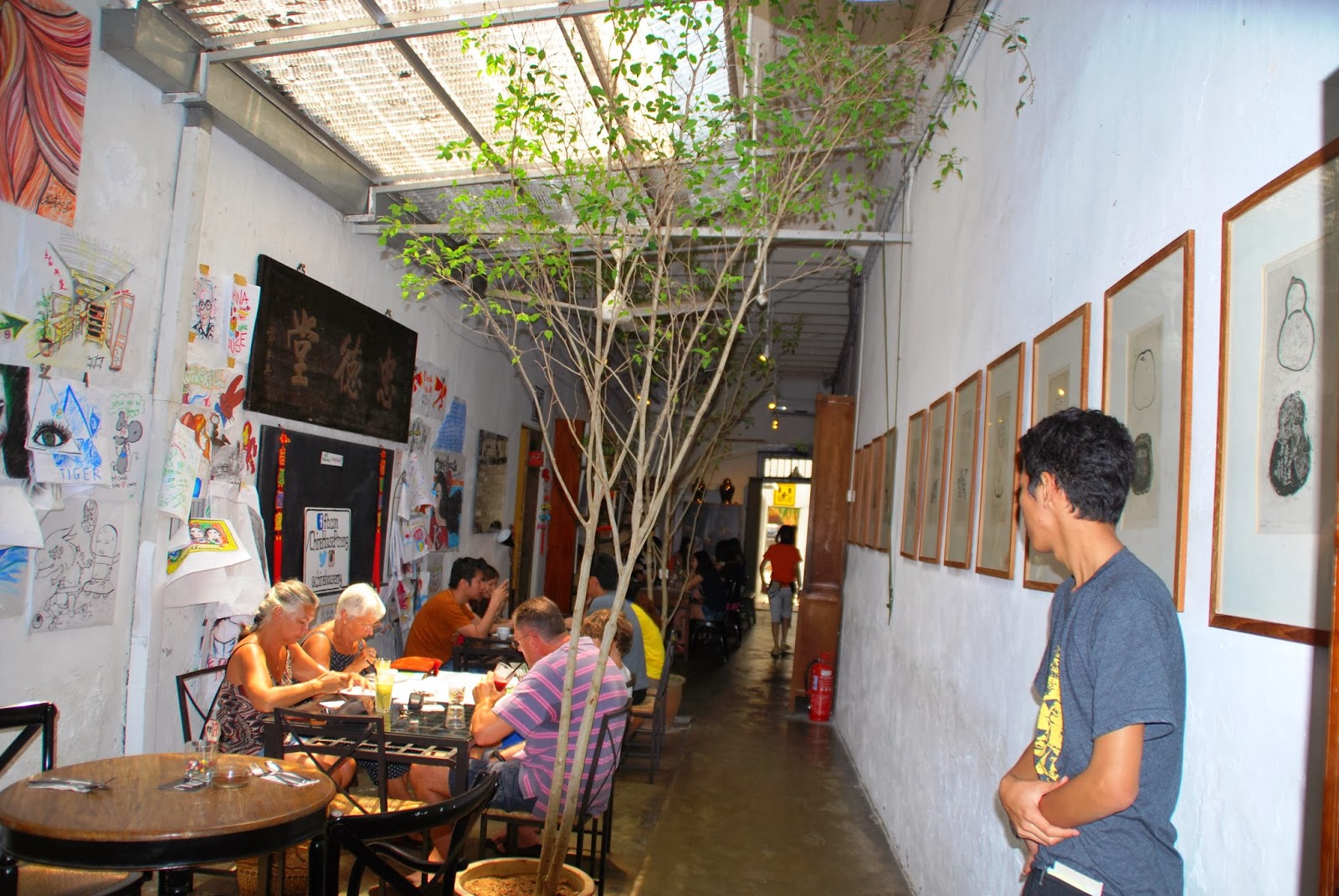 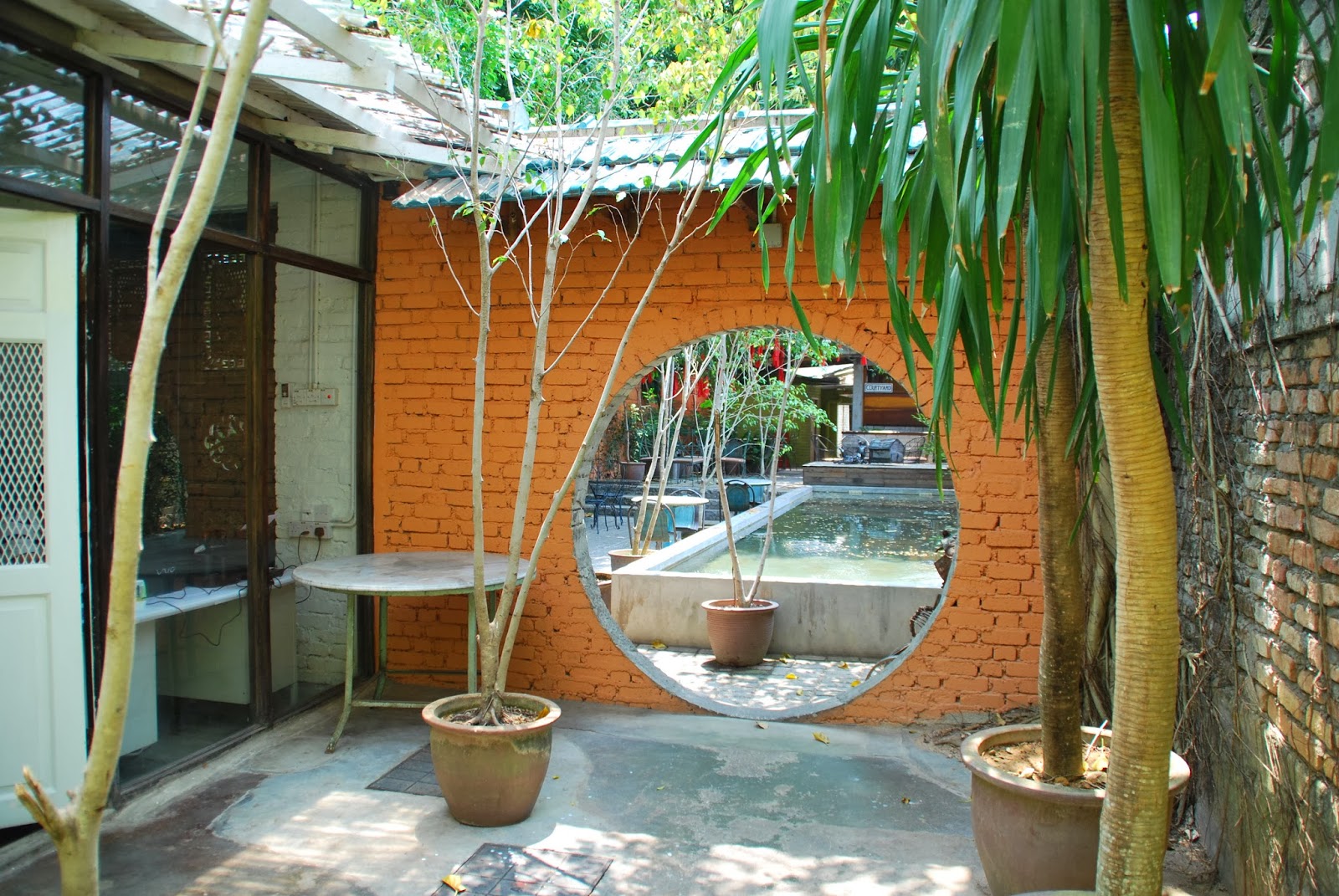 The Street Art of Penang... 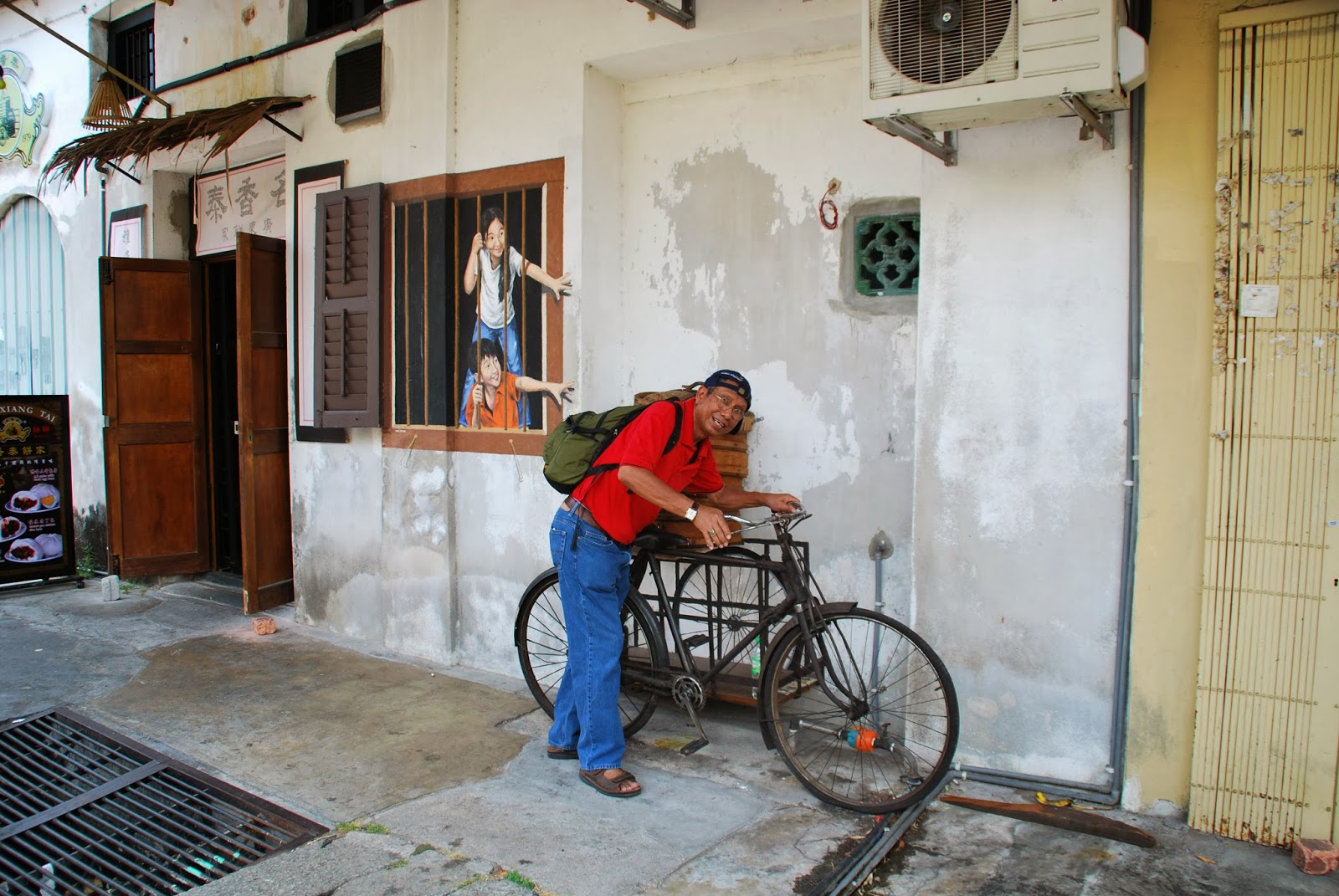 I have always loved the work of art and that includes Street Art. Street Art is a form of free expression in a democratic society where artists would create artwork on the wall of buildings along the streets in town to display their creative works. It add colour to the streets which would otherwise remain dull and monotonous. 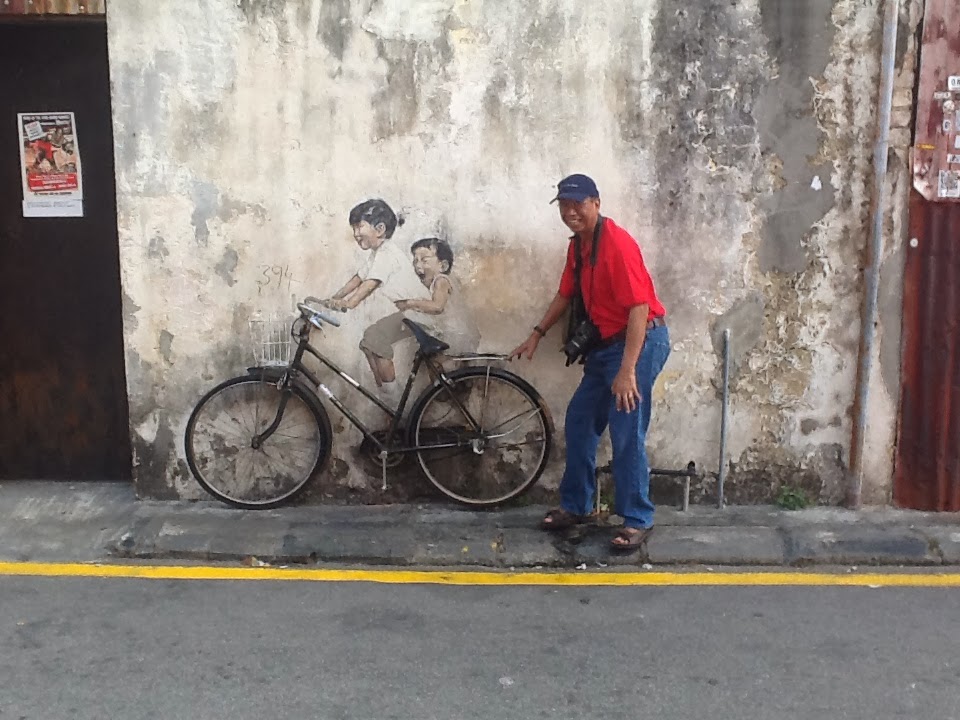 In Penang the work of Ernest Zacharevic a young Lithuania-born artist call ’The little Children on a Bicycle' painted on a street's wall along the Armenian Street went viral and soon draws the attention of the world. Eventually more such artwork was created at other places in the city which includes those that are done by the local artists. It soon draws tourists from near and afar to Penang. So while in Penang the other day I decided to go and have a look at the many Street Arts that had been painted on walls all over a certain part of the old city of George Town on the island of Penang; an old city that was found during the colonial era. It was then call the Pearls of the Orients. It is a trading post from the time of the spices trade until the present with its harbour still is one of the busy port of Malaysia. With a long history many immigrants from China and India make it their home here together with the local Malay. Now it has grown to be a metropolitan of millions of people, sort of a microcosm of what the Malaysian society is all about; multiracial, multicultural and multi-religions as it is seen today.  As a thriving city in the North West corner of Malaysia it now can boast  of one of the tourist destination of the world. Tourists from near and afar come here to enjoy its hospitality especial the food, now the Street Arts has become an attraction by itself bringing tourists over just to see it for themselves. 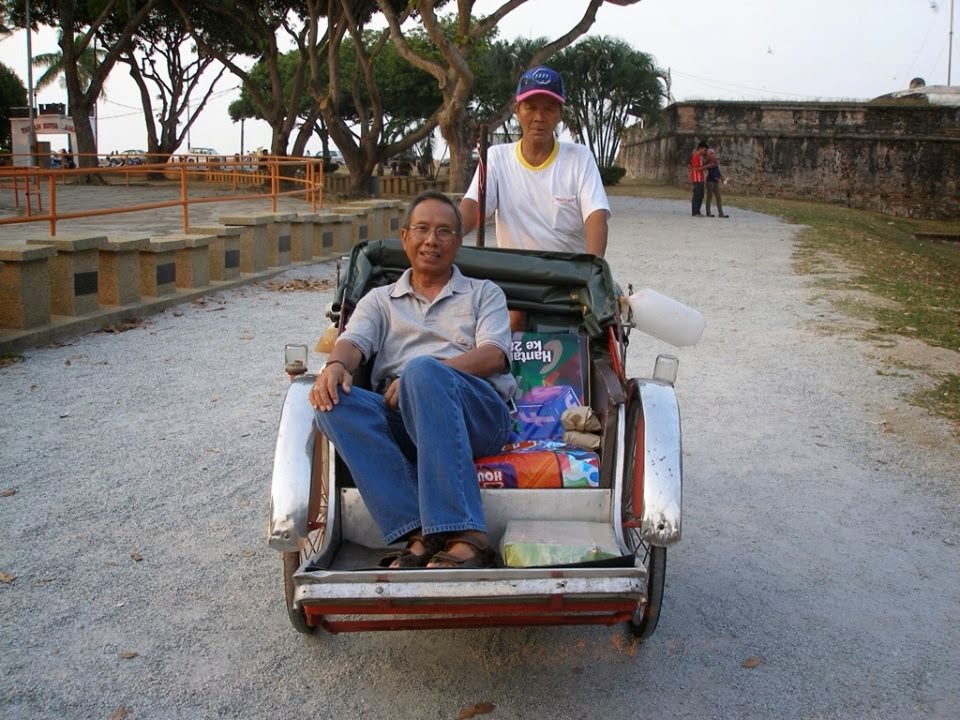 So while in Penang recently I too decided to go and see this wonder of the arts that have attracted so many to Penang. To do that I took a slow ride on the trishaw and let the paddler take me into the street of George Town where those Street Arts are display. In the slow drive of more than an hour he took me to see the Street Art that has become a tourist attraction in the part of the old town. Everyone who saw it was happy and took turn to photograph it. I did it too and got a friendly tourist to snap one for me as seen in the image above. Indeed a fascinating experience to be in that short period of time. I did enjoy watching the many artworks all over that part of the city and would surely comeback again to look at the other that I had missed during this short stay in Penang.