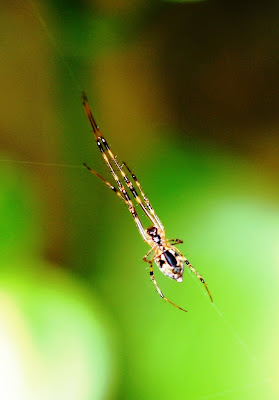 One of the beauty of my little garden with it small jungle and a fishpond is that it has became sort of an ecosystem of its own. Small insects and animal comes as it please turning the garden into its playground. This little garden is part of my patio and it is a place that I did my gardening or just sat at the Kopitian table to enjoy my coffee. Most of the time when I am there I could see small creatures enjoying itself in and around the greens. That folks brings peace to my mind. It does made me appreciate the greatness of nature more than ever.

At time I would just flirt in my mind about all the possibilities that this little world could offer to enlighten our lives. Sometimes I would just daydream and enjoy those beautiful moment in time. In the midst of that daydream I saw a little spider perched on the delicate web that it has spun, careless of what's happening to its surrounding. It is in a world of its own and I am enjoying watching it doing its jobs creating that web, where it would live for a few days. Laying it eggs and then would vanish into its hiding place somewhere around there. This time I took the opportunity to photograph it with my macro lens and here I am sharing what I saw. Much as I had enjoyed snapping those images I believe others would enjoy it as well. Have a nice day. 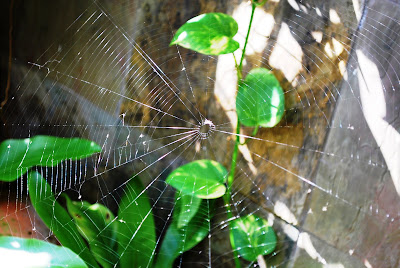 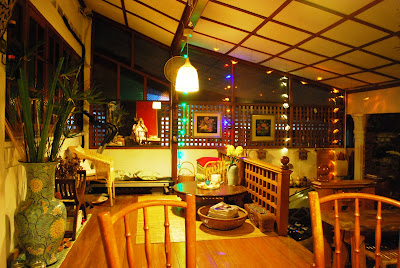 I sat with my laptop at the Kopitam table not knowing what to write today. It has been somewhat a depressing weeks made worst by the extreme weather where the heat is intense like never before. Where the Northern Hemisphere is getting the worst snowfall, we in the tropic are getting the heat that is not normal at this time of the year. It look like this is the cause of the global warming that scientists had warn us would happen. Yet there are folks down under in Australia who still do not believe on the global warming. On Australian TV news I saw an Australian politician making a joke of this warning. Their forests are burning, the rivers dried up and the land cracked without moist and yet they still did not believe in global warming. How naive could they be?

Anyway as I had said earlier this has been a rather depressing weeks; first about two weeks ago a friend from the neighborhood die after been sick for sometimes. The late Chong [85 years old] would stop in front of my house whenever he passes by in his minicar driven by his spouse and we would chat and jokes to pass the time away. He was always cheerful and now he is no longer with us. His two kids have migrated to the west and now what left in the house is the late Choy spouse. Last Friday our next door neighbor popularly known as the Ustazah Zainun [75 years old] who teaches Koran to the kids here passed away too. When the ambulance came I went to have a look what was happening and soon found that she was already taking her last breathe. She passed away at 5:40PM that Friday afternoon. She and her spouse CheGu Amin has been our neighbor from our youth; first when we were living in Kuantan in the early sixties and then when we move to KL. Somehow we bought a house adjacent to them and thus continue to be their next door neighbor. CheGu Amin is now eight five years old and has not been really well either. And two weeks ago Amylia Chong the friend of one of our daughters who lives in the neighborhood told me that her dad [83 years old] drove the car to Ampang Point which is just three kilometers away and could not find his way home. He had taken a wrong turn and drove all the way to Kuantan on the Highway and then turns around. Somewhere at Mentakab a lorry driver saw a car zigzag on the Highway, stop his lorry and help the old man to get connected with his home. In the meantime his daughter had reported to the police of his missing. Anyway to cut the story short he eventually arrived safely home after an ordeal of teen’s hours. What a turn of events it has been for the weeks.

As I write this I saw that elusive squirrel came around to enjoy the fruits that I had regularly put on a plate about the fence for it to enjoy. I have been feeding the squirrel with cut fruits for years and it seems that little animal is enjoying its regular feed. In return it gave life to my little garden and I enjoying its presence. As I wander along I saw a yellow butterfly flew by trying to find a spot to land. It was really nice to see this yellow butterfly flying around between the plants with ease. I was hoping it would find a place to land and perch on the leaves long enough for me to photograph it. But it seems not to want to stop flying and eventually flew away from my sight. Then I notice a spider web above the fishpond with the spider clinging to it and continuing to wave the delicate web. I took my camera and this time I managed to take a snap of that tiny spider in action.

Soon it was evening and the light began to fade away. With that the weather began to cool down. I turn on the lamps at the patio/Serambi and enjoy the cool breeze as the wind blow over. One of the most interesting parts of a traditional Malay house is the Serambi or patio; an outside space in front of the house that are special add-on to the house. It is part of the house but at the same time it is separated from the main house. The wisdom of having the Serambi is that it allows the space to be use for chat or yarn among friends without disturbing the folks in the main house. It is also a place to relax for the elderly folks in the afternoon when the weather is often hot and humid. In modern house the patio have been left out completely by the architect, perhaps due the influence of the west where most of our early architect went to study, so one would hardly see the Serambi in modern Malay or Malaysian home. Sad indeed but that is what happen when planner did not take to the wisdom of the old in their thinking? I grew up in a house where there was a Serambi and I found it to be a very useful space indeed. So when I bought this house I had a Serambi built as seen in the image above. Have a nice day.
Posted by Pak Idrus at 4:15 pm 19 comments:

Labels: One of those days... 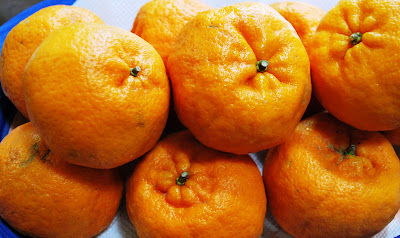 Kong Xi Fa Cai [Happy Chinese New Year] to all. May we all continue to prosper and enjoy life. Have a nice day.
Posted by Pak Idrus at 12:01 am 4 comments: 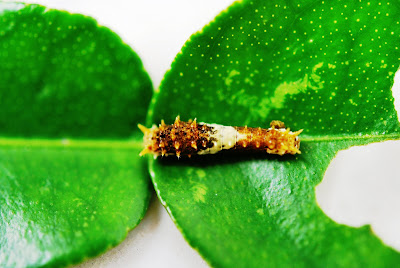 I snap this up at the little garden at the back of our house. It shows nature at its best. Do take some times to ponder and enjoy this image. Have a nice day.
Posted by Pak Idrus at 9:23 pm 8 comments:

The Dinosaur at our backyard... 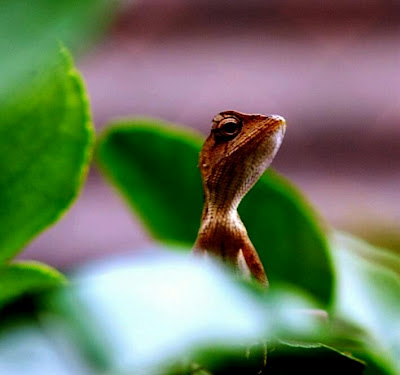 I was lost in cyberspace, careless of what was happening in the real world. Facebook, Twitter and Blogging take my mind away into the realms of the other reality of communication. Since the advancement of the Internet the meaning of communication in our world has changed for good. I was deep in cyberspace and lost in the web when suddenly my youngest grandson came running saying something about a funny lizard out there on the tree in the garden at the back of the house. Grandma was busy with watering the plants and Azib with his curiosity must have notice something different on the tree. 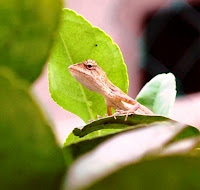 For wanting to know what it is he rushes to me and excitingly asking me to come and see. Jolted back to the real world and somewhat reluctantly I got myself from cyberspace and told him that I know there are lizards out there in the kitchen, some under the washing machine and the fridge. That is what I first thought what he was saying until he say no it is not the ordinary lizard. This lizard is on the tree and look like a dinosaur that he often saw in the movie i.e. the Jurassic Park. Then it dawn on me that it is not an ordinary house lizard but a lizard of a different kind that often climb tree.

When I was a small boy living in the kampong this kind of lizard was often seen climbing the coconut trunk near the house. We were told not to disturb it and that it would bite. So we more often than not leave it in peace. This morning like me our grandson was as excited. So I rush out and true enough there is a funny lizard squatting on the leaves of the lime tree. It did not rush to hide when confronted like the house lizard did. 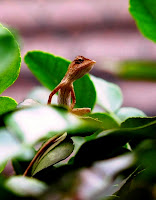 I told Azib that I am going to take my camera and take some image of this amazing little creature. With the camera I took aim and it look like the lizard seems to enjoy posing for the camera. I took my time and snap some good images. Here are some of the images of that creature; that had Azib sharing his joy with me, the grandpa! An exciting moment indeed! Have a nice day.
Posted by Pak Idrus at 12:01 am 9 comments: