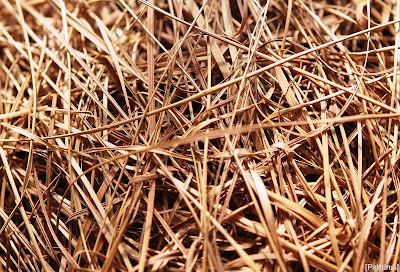 Above is a micro image of a bird nest that I took using the Macro Lens.  Enjoy it folks.

Tanjung Piai; the Southernmost tip of the Mainland Asia landmass... 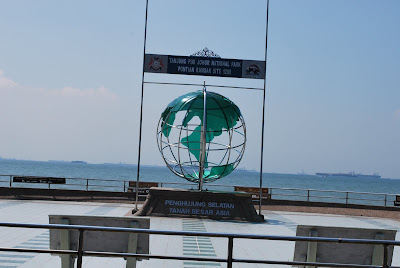 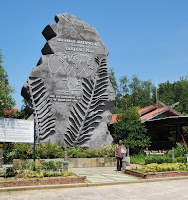 I was in Singapore for a short holiday and had visited many places of interest in the republic and did enjoy that short stay. Since Tanjung Piai is near to Singapore I thought that on my way back to Kuala Lumpur by way of the Second Link I would make a visit to this landmark of the country, which has now been turn into a Johor National Park. Although It is close to the Second link there is no direct road to Tanjung Piai as yet.  I hope the authority would run a road from the Malaysian side of the Second Link to Tanjung Piai. Thus would open up the area to tourist potential and a boom to that landmark; the Southernmost Tip of Mainland Asia landmass. As for now to get to Tanjung Piai one had to drive up to Pontian and then drive south.

Leaving early in the morning out of Singapore, I fixed the destination on the GPS and we head to the area with my nephew driving. With that I had the opportunity to enjoy the ride along the old country roads that had been upgraded. As usual with GPS it would lead you to your destination as it see it and one had to drive through unknown roads and detours to get to the destination. Anyway after more than an hour drive we got to Kukup and following the GPS we arrived at Tanjung Piai just before noon.

We parked the car and went straight to have a look at what we are looking for. After paying the entrance fee and got some assistance from the official we proceeds to the well laid wooden pathway that shows the direction of our destination 'the southernmost tip of mainland Asia landmass'. The weather was on our side with the sun shining bright. I could see patches of white clouds and blue sky all over, giving brightness to the jungle all over the pathway. Most if not all the greens are of the Bakau [mangroves] which grows well in such area beside the sea. Actually the Bakau act as a natural barrier of the seafront from erosion.

A tough tree species that thrives very well in the damp and water covered areas of the forest. From the look of it there are many varieties of mangroves here. Signage are place here and there giving information about what varieties are found along the pathway.
As I walk that pathway I notice the tide was low and I could see the seabed with  some of its habitat like small crabs running around or digging holes. In one area I saw many seashells laying around and I believe one is forbade to collects it. Since it was in the mid-noon I believe most of the habitats are having their siesta of sort but I did saw a group of monkey doing their ritual of caring one another careless of us human encroaching its territory.

Both sides of the pathway were all green of the Bakau trees and at this low tide I could see the roots all above grounds and seedlings just sprouting all over. To make the walkway colorful the Park Authority has placed signage at various places to give the visitors information of what are there to see in the park. There are also interesting signage giving soft warning like the one shown on the left of this paragraph. And I believe it does give a clear and loud message to the visitors. [signage translate 'Only Monkey are allows to throw rubbish]

After about twenty minutes of leisure walk I reached the destination of this trip; the place of the 'Southernmost Tip of the mainland Asia landmass'. The image on the left shows me at that place under the blazing tropical sun. I felt great to be able to be here today [April 28, 2011] at this landmark of the world which happens to be in my country Malaysia. I walk around and from there saw the west coast of Singapore and ships that ply the Straits of Malacca. There are jetty erected especially for those who want to do fishing. From the look of it the place must be well patronized from time to time. Any nature lover would love to walk the kilometers of Pathway that had been erected taking one to the center of the mangrove forest, an experience that one could never get in the other parts of a jungle trails. The pathway are made of wood and well laid, making it easy for one to take a lazy walk and enjoy the atmosphere of the forest. While there I could hear the sound of birds but did not see any.

There is a signage as shown on the left which I believe one know pretty well that one are not always alone in such a lonely places. There are the creatures that makes this place their home and if one is lucky one would get the chance to see the many creatures, like huge lizard, crocodile, monkey and wild fowls, wild Boers and the like.

For those who have the time I would suggest they camp the night here and enjoy the happening in this unique corner of the world. Where thing are just in its originality and the atmosphere serene, as thought it has never been tempered with by times. Facilities for camping are available on request.
After getting a certificate of our visit there, we left the area heading for Kukup where we had a  seafood lunch. With that we head for Malacca and then home in KL. A hectic but enjoyable day indeed.
Have a nice day. [Please click image to enlarge and location below to see the map of this place]
Posted by Pak Idrus at 7:56 pm 15 comments: 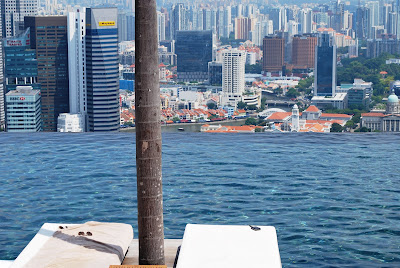 Folks; last week we visited Singapore and one of the place we went is the Marina Bay Sands. We went to the Skypark which is on the 56th floor and saw the highest Swimming Pool in the world. Part of it is seen above. Have a nice day.
Posted by Pak Idrus at 7:02 am 8 comments: