A happening in Johor Bharu.... 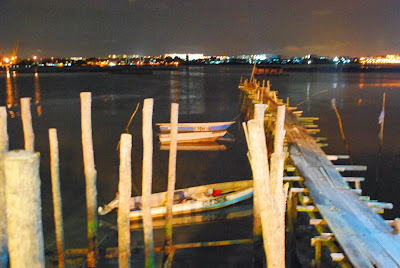 After having a great time at the Johor Premium Outlets and created some damage there we proceed to Johor Bharu. We arrived at just after six in the evening and check in at a new hotel at Permas Jaya; the Renaissance. After a good shower and a short rest our son in law took us on a ride out of the hotel to look for the Seafood village nearby. After a while we found a Malay village with a mosque and a sea front with rows and rows of eateries that sell nothing else but seafood. The place was already thronging with folks having dinner. Been the first time there, we just browse along and eventually found a table that could accommodate the whole family of seven. The eatery is on the coast of the straits of Tebrau facing the island of Singapore. 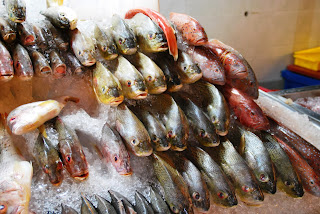 We ordered dinner of various kinds of seafood and white rice and then enjoy the scene as we wait for our meals to arrive. It was really nice to sit there and enjoy the cool breeze and the smell of the sea. Yonder glittering with lights is the the coastal area of the northern part of Singapore that most Malaysian call the Dot down there. It was a magical scene of glittering sea and some small boats tied at the jetty nearby turning it into a picturesque sight indeed.  I love watching such scene since it remind me of my childhood growing up at the coastal town of Kuantan. It parts of my culture of growing up thus such scene especially the sea always refreshes me.

Nearby a man was busking with sweet melody of oldies that was pleasing to the ears. I give a Ringgit to my young grandson to put into the basket in front of the busker. Later on I went to talk to him and drop a few more Ringgit into his basket. I love watching busker doing their show. It creates a musical environment of its own kind, an enjoyable sight to enjoy and wonder. I took a few snap of the man busking in the dark corner of the eating stalls and thanks him for the good show. 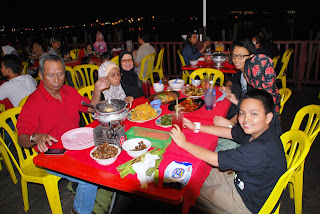 Soon our order of seafood arrive plates after plates and placed on the table. We thoughts that we had order too much but after enjoying the meals found that it was just right for the food was tasty, fresh and delicious. When the bill arrives we found to our amazement it does not cost much, just less than RM250.00 for a dinner of seven people. We were happy with the quality of the dinner and the price we had to pay. In Kuala Lumpur it would have cost double that. We then went back to the hotel for a complete rest after the long trip from Kuala Lumpur; the four hours adventure at the Johor Premium Outlets ending a yet another beautiful day. 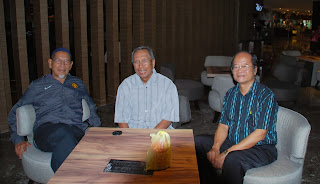 I then took a moment to call a long-time friend who lives in Johor Bharu, he was excited and would come over the next morning to see me. Just before that I wrote a message to a Facebook friend and told him that I am in Johor Bharu and that it would be great if he could join me for breakfast the next morning. We had been friend on Facebook but as yet to meet. The reply was positive and that he would take the time to come over and join me for breakfast the next morning. So at the breakfast at the hotel I met Harold Angus in person, completing a friendship made in cyberspace to the real world; now a stranger no more. We sat to enjoy the breakfast and chat on various subjects that come to our mine. I then introduce him to the family who were enjoying their breakfast at another table. Later on my spouse came over and joints the chat at our table. While in the midst of the breakfast I remember the other person who was to be here this morning. He was one of my officers when I was working in the Ministry of Culture, Youth and Sports. Like me he has since retired and now lives in Johor Bharu. I call him on his cell phone and found that he has already arrived at the lobby but did not want to join me for breakfast for health reason. He would just wait and meet me after we are done with the breakfast. After finishing our breakfast the four of us; my spouse, Harold Angus, Md.Nor Jabar and I set at the lobby and continue our chat. It was really nice to get to meet Md.Nor Jabar again after a lapse of some 20 over years. And meeting for the first time Harold Angus; a story of friendship from cyberspace to the real world. After a while and since they both had other business to attend to we parted with a promise to meet again. The meeting of both of them does made my day.

Labels: A happening, An event., foods and drinks, Greeting, people and places..., Travel 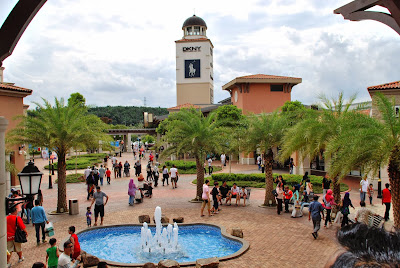 Our daughter invited us to go for a short holiday to the south. So last Sunday December 22,  with our son in law driving we left KL at just past nine in the morning travelling on the North South Highway toward Johor Bharu. The weather was good so the ride all the way was smooth and enjoyable. Since I was not driving I was able to take some picture of the scenery as we move on. We stop at a rest area at Macap and had our lunch, then proceed on. 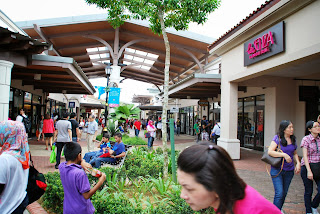 At around 1PM we arrived at the Johor Premium Outlets, the biggest such outlet in this country. It is one of the many such outlets in that category that spans the world. Just click on the outlet above and you would understand more about this amazing shopping paradise. I have not been there before so the moment I saw the building I knew it must be of an international standard. It almost looks like the one we visited in Austin, Texas some years ago. On getting closer and later getting more information about this place sure enough it is indeed a part of the world network of such shopping outlets that sell all branded goods from all over the world. 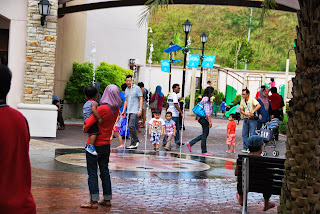 After parking the car we went to venture on in the sprawling outlet. The place was already thronging with people shopping, eating or just whiling their time away. With everyone in the family having their cell phone it was easy to just go our own way to enjoy the place and do the shopping our way. For a while my two grandsons follows me but eventually they decided not to follow since their interest are different from mine. They then re-join the other family group and went on their own way. I decided to get some snack at the Food court and browse along to the many shops. I found that the prices of goods are much cheaper than at the outlet in the malls in Kuala Lumpur. I did shop for a few shirts and happy with it. After almost three hours the whole family met again at a food outlet and had some snack and drinks. We then decided to do more shopping. Personally I found this shopping paradise is an exciting place to shop for branded goods since the price is less than in Kuala Lumpur. 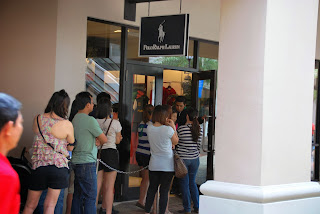 Image on the left shows folks queuing to get into an outlet. They do that so that the others already inside could do their shopping with ease. Once more people get out they would allow the others outside to get in. They do that to avoid too many people into the outlet at one time thus became uncomfortable to shop. At first I thought that the outlet is yet to open but on enquiring found out that it is close for a while to create a good shopping environment inside the outlet. I thought that is indeed a good idea. With that everyone could enjoy their shopping.

We left the place at just past five in the evening heading to our hotel in Johor Bharu. All in all it was exciting trip to the south. I did enjoy the day.

Labels: An event., Holiday, On the road, Shopping 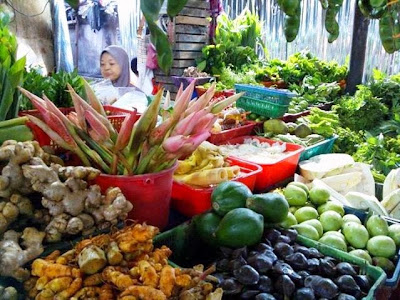 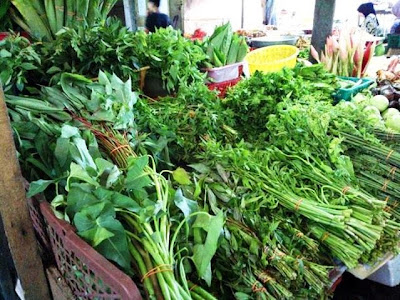 It was a beautiful Saturday I decided to go to the wet market at Datuk Keramat to buy fish, seafood, vegetable and  poultry. I do that once a fortnight. This time I did not drive but instead ask our daughter's driver to take me there. At nine on that beautiful morning he drove me there. While he looks for a parking spot I went to get those things that I have come to buy. Since most of the folks who sell here are now my friends I had just to go to each stall and order the fish or other seafood or the poultry rest assured that those that I bought are of quality. I went from one stall to another and made the order and then move to buy some greens and herbs that my spouse has ask me to buy. Array of the Ulam [local salad] and other vegetables and herbs are beautifully arranged for sale. I bought a few and collect the fish, poultry and the seafood that I had bought and put it in the boot of the car. And went home happy with the purchases. Above are some of the Ulam and herbs that are displayed for sale at the market. An interesting array of  fresh vegetables and herbs indeed.

Well someone mentioned on Facebook that today December 11, 2013 is a special day. It is 11-12-13 and that it only happened once in 823 years. Well it is not always we get these numbers coming along like that. When I was in school there was a date that I remember well indeed. It was May 5, 1955 and we wrote happily in our excise book as 5-5-55.  Well it was one of those days in our lives and could easily be remembered. I was then fifteen years old and was in Form three and still enjoying my schools days oblivious of the happening in the real world. In 1957 I took the most important examination in my school life and that was the Cambridge School Certificate. In 1958 with the Form V certificate I start to work in the government service as a clerk. In those days not many talk about going to the university so it was natural that kids like us went to work eager to start making money on our own. That folks start my journey of life as an adult.

Have a nice day.
Posted by Pak Idrus at 4:53 pm No comments: