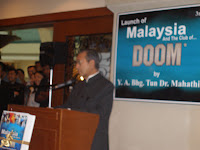 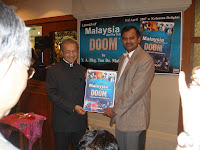 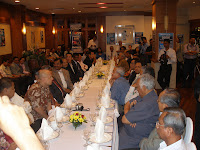 It happen yesterday the third of April. The occasion is the launching of a book, the author of whom is a close friend of mine. Dr. Mahathir our former Prime Minister was invited to launch the book and I was one of the guest that was invited to the High Tea launching. It was held at the Kelantan Delight restaurant on the forth floor of the KLCC. Incidentally the owner of this restaurant is also a friend of mine, whom I met when I was living in Boston, USA some years ago. He was then attending a short course on Entrepreneurship at Boston U.

Well on the dot, the former PM arrived and we all took our seats and soon the function began with the introduction speech, the speech of the author Syed Akhbar Ali and then Dr. Mahathir, who spoke on the theme of the book, launched the book. His speech though touching serious issue related to the book, is laced with pertinent jokes that kept the crowd laughing from time to time. I have read the book, a sort of a provocative book on the country relationship with Islam and the issue of The Failed States. Malaysian seldom get to write such book and at time it get banned. In this case it is still on sale at all the major book stores. The title of the book is ' Malaysia and the Club of Doom * The collapse of The Islamic Countries '.

Presence at the ceremony and the High Tea are friends of the author, Senior retired journalist, journalist from various News Agency and Bloggers. Among the bloggers are Rocky and Raja Petra. I had a chance to meet Raja Petra again and as for Rocky it is my first meeting with him. Later on he introduce me to the other bloggers and we sat to chat on the subject of the effect of Blogging in Malaysia. A very powerful tool for the dissemination of information using the Internet. For Malaysian it is indeed a godsend tools for the democracy.

Before the party start I had the opportunity to meet a young journalist of a sort who came with his dad and his sister. We had a short chat and from that I found that this young man with the big camera is well informed of the current issue, articulate and with good education. Later on he told me that he studies IT and now doing freelance photography and enjoyed doing it. We talk on various subjects and I found that this young man is very open minded and a wonderful person to talk to. He took my email address and says that he would keep in touch with me.

Well friends it was indeed a wonderful day. For it was an afternoon of meeting of so many like minded people. And then got the opportunity to shake the hand of a great statesman. The Dr. Mahathir, our former PM. He had served the country for twenty two years. The man that quantum leaped us to the first world. Today meeting the man at the KLCC or the Petronas Twin Tower, a building that was dreamed by this very man, is indeed an event of significant important to me. Meeting the Man himself in the nation monument of a sort, the Petronas Twin Tower is indeed a dream come true for me. Friends What a Day!!!. Have a nice day.
Posted by Pak Idrus at 2:38 pm

Mahathir is truly a great leader. Guess it will be sometime before anyone of his stature leads Malaysia again. For now, we will just have to be content with the current jesters in our Parliament.

bnaipal, agreed. I take that this is a 'pause' in our history. thanks. Have a nice day.

Nice to have been introduced by Rocky. Pity we didnt' have teh time to chat.

You shd come join the bloggers get-to-gather ... believe me you'll never come across such camarederie where we "agree to disagree" but we "agree in the freedom to blog".

a voice, thanks for the visit. There is always the next time for TT. Great meeting the new face of blogger that day. Hope to see you soon at your get together place. Have a nice day.

Pak Idrus, I have included your blog on my roll. Sila mampir2 juga, ye.

a voice, friend thanks for the return visit and for including my blog on your roll. BTW where is your blog, I could not fine it, only blank in your profile page. Dimana!!. thanks.