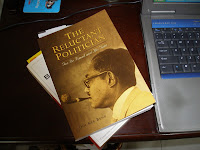 I have just finish reading the book The Reluctant Politician - Tun Dr.Ismail and His Time by Dr. Ooi Kee Beng. I am indeed glad at last his legacy has been brought to light. Thanks to his son Tawfik, the generous support of Professor Saw Swee Hock and ISEAS, the publishing of this book has been made possible.

To me, a person who live throughout the period when the late Tun was the man that we all so revered, every page that I turn bring back memories that are so real. I was then an officer in the government and live throughout that period with great pride that I had the opportunity to served the country under the able leadership of this man. Proud that I had also the opportunity to be in the same room with this statesman a few times in the course of my duty. Especially so when he came for a briefing at the Ministry of Culture, Youth and Sports. I was then one of the young officer in the Youth Division. My boss was then the Director of Youth, Abdullah Hj. Ahmad, the present Prime Minister. Annuar Zaini, a Youth leader from GPMS now the Chairman of Bernama, one of the person that was interviewed by the author went with me to Ghana in the mid seventies to attend the Commonwealth Youth conference.

This book is very well written indeed and as such give a true picture of the Man that most of us from my generation would say as 'The Prime Minister the we never had'. Indeed everyone at that time of our history hope that when the time come, the person who would be the Prime Minister after Tun Abdul Razak would surely be Tun Dr.Ismail Abdul Rahman. But then fate had it that he was called to the Lord before the Tun, at an early age of 57 years old. I remember that day very well indeed for at that time he was our Acting Prime Minister. The Late Tun Razak the PM was then in Canada attending to an official business. Tun Razak rushed back and ordered that the Late Tun Ismail be laid to rest at the National Mosque in Kuala Lumpur. The first person to be given the honour at the mosoulem beside the mosque. The whole country mourn the lost of this great man. Thousands line up the streets to pay their last respect to the late Tun. I was one of them among the seas of people, never seen the like in Kuala Lumpur. Malaysian do love this man.

As a person who live throughout that period of our history, I am happy that Dr. Ooi Keen Beng did a good job of writing this biography. For the author did brought to light many things that most of my generation knew and the present generation knew nothing. The book to me is indeed a godsend document of the contribution of a great son of Malaysia. The Tun Dr.Ismail Abdul Rahman. His son Tawfik did a splendid job of getting this book published

Malaysian especially those of the Merdeka generation should read this book and understand the difficult period of our history that Tun Dr.Ismail brilliantly managed. Thus set forth the future of the Malaysia that we see today.

To all my blogger friends do take the trouble to read this book. One of a kind. And hope that the late Tun's works and thoughts would help the present Malaysian understand the reality of the Malaysia that we have today. Have a nice day.
Posted by Pak Idrus at 9:09 am

Been looking forward to this book for a while now. Unfortunately I don't think it'll be released in Australia.

Pak Idrus
Crossed over from Rocky's.
I've read the book and find it highly educational for post-independence children like myself. While it was hard for them to get us the Independence, I would think we would have to work much harder to keep it.
Salam

The late Tun Ismail did not indulge in time wasting political gimmicks - a profound characteristic of our current leaders. Maybe they should also read the book to get an idea of what they should actually be doing!

I've read the book and it's worth every penny of it. If I were u pak idrus I'm very much proud to have served such a man. The Prime Minister that we should had!

I happened to see your posting today while surfing the Net during a coffee break.

Thank you for your kind words.

I do hope young Malaysians will get a better idea of what Malaysia should have been about from the book.

Friends thanks for visiting my blog and the useful comments:.

a] To Jeffrey, do look around first and if you still cannot get a copy do write to me.

b] To Fauziah Ismail and Tun Teddy. You are from my children's generation. The future of this country is now in your generation's hands. Do write to me for further exchange of ideas and thoughts.

c] To Banaipal agreed that everyone of our present politicians should read this book.

d] To Dr.Ooi Kee Beng. Indeed a great honor to get a visit from the author himself. Will be seeing you in person soon.

e] My email address is at the right column of this blog.

now I among your readers

Anonymous [2:33AM], thanks for the visit and glad that you like my kind of blogging.

After reading that book I understood, that it's really important to give it to schoolclidren in order them to get acquainted with its high ideals. Great thing, really.

Forex Signals, thanks for the visit and sharing your thoughts on this very important book. Agreed it should be a text book for all school in Malaysia.

This is such a wonderful insights. Thank you so much for sharing it. Have a great day!