A Beautiful Home in Batu Rakit...

We were in Kuala Terengganu [May 27 and 28, 2011] and there we met Hassan of Almanar and his spouse. It was our first time meeting after having met him on cyberspace through blogging. He invited us to his home in Batu Rakit for Tea. So on the afternoon of May 28 with the weather on our side we drove to his house using the GPS as our guide. Since he did not provides us with his home address we had to just rely on the destination of just Batu Rakit. On nearing Batu Rakit we got lost as to which direction we should take. I then call Hassan on his cellphone and soon was directed to his home with him talking on the phone as we drove on. We were directed to just drive into his compound, a sprawling bungalow amid the Kampong environment.

Parked the car and went out to shake his hand and met his charming spouse Salmah. We were taken to the patio of his home, an area facing the sea. He had built his home well. Not too far and not too near the seafront. Out-front of the patio are trees and shrubs that he has planted over-times; giving the house a windbreaker of sort from the harsh monsoon wind and rain comes the end of the year. I like the house and the way it was designed. 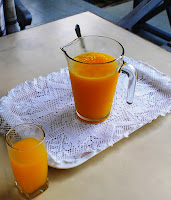 At the patio we sat to enjoy the special blend of mango juice that Hassan especially prepared from his homegrown mango. We sat to chat and enjoy that heavenly juice with an aroma of sweet and freshness, a bliss. I saw a Kesidang trees with many white flowers. I grasp my camera and snap a few images of those flowers. It sweet soft fragrant is indeed enchanting and does add to the atmosphere and beauty of the garden around the patio. We talk on small-talks and then his spouse excuses herself and left for the kitchen.

We then move back into the house and sat at the dining table where we had tea with that special Keropok Lekor that taste like no other that I had tasted before. In between Hassan kept pouring the mango juice as soon as one took a gulp and placed the glass on the table. We then move to the sitting area where we continue with our chat. On some serious subject that are close to our hearts, the education of kids in the rural. The two women stayed at the dining table to compare notes on their own. From what I could see Pokcik Hassan dream was to give back as much to the community and in this case he decided to give free tuition to school going kids at his own Tuition Center near his home. Over time he has indeed managed to educate more kids than he ever thought possible. With the knowledge they gained most of those kids has done excellent in the examination and tertiary education and later on in their lives too.

A numbers’ have return from time to time to say Thank You in person to Pokcik Hassan. The image on the left [stolen from his blog] shows a group of successful ex-students revisiting their once tuition center and gurus. 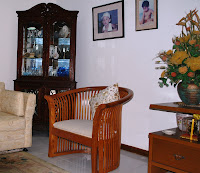 The home itself is a dream for most of us but it a reality to Hassan and his spouse Salmah. A well designed house with everything in need within reached and he has colored the whole house in various shades of blue, the coolest color on planet earth. I like it and instantly fell in love with this modern architectural home amid a Kampong environment. How I wished it is mine to live in and enjoy life in my golden years. But then it is not possible since we have different needs. After living so long in the suburb of Kuala Lumpur I no longer could live outside a city environment; where everything are within my reached and it is a first world with its own economic system.

Anyway I do envy Hassan for getting his dream home come true and enjoy every minutes of his life in the golden years at this paradise of his. At the same time parting his knowledge to the young who would otherwise deprived of such educational opportunity that has been proven would improved their quality of life. Well, we cannot have everything in life. For me I am grateful for what I have got. And enjoying our lives as we know best with our loves one in our Pondok in Ampang Jaya, just five minutes away from the world famous Petronas Twin Towers commonly know as the KLCC. 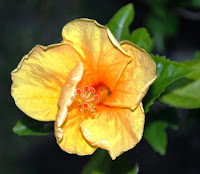 Well folks we did had a great time in those short-spans of time in that beautiful home in Batu Rakit, thanks to the hospitality of both Hassan and Salmah. Have a nice day.

Pak Idrus,
Some people are lucky to have such a nice home. Like they say, home is where the heart is.

My first surprise visit.. last Ramadhan so no makan makan..
My second visit, Mok Cik was visiting her ailing mother in Kalumpang so no makan makan..
I have no complaint about no makan.. I write here just to say how lucky two of you were to have both PokChik and MokChik to enjoy your visit ;))
On my last trip back to Trengganu.. PokCik went to Jerteh for friend's khenduri.. so I did not visit him then ;(.

As-Salam Pak Idrus
What a lovely trip to Pantai Timur!

A banglo facing the sea? Kalau saya punya, syurga di dunialah itu! I'm imagining Pok Hassan enjoying daily fresh fish caught from the sea infront of his house. And here in Bangi, we have to content with 'ikan lembik' and "ikan merah mata'.

You have used your writing skill to paint a wholely unblemished picture of that visit to Batu Rakit. We are embarrassigly and unfairly flattered. Hopefully, that is not to be the only visit.

Pak Zawi, thanks for the visit and sharing your thoughts on the subject of this posting.

Well it look like you have been to this beautiful homes many times and how I wished I could be there as many times like you did. I hope to visit it again when I am there.

I felt in love with that home near the sea since I practically grew up beside the sea in Kuantan. The sea have always be my love and it would surely be great to be able to live so close to the sea like Pokcik Hassan.

I am glad that we got to meet both of them during that short visit.

Temuk, thanks for the visit and the good works.

Well we did had a great time visiting friends and seeing place on this trip to the east coast. During that visit I did get to meet many strangers whom I had only met in cyberspace before. We all did had a wonderful time in each meeting, so now stranger no more.

It look like we must find time to meet since we are not that far away. As for that beautiful home, like you I could only dream and be contented with what we all have got now and continue to enjoy life.

Al-Manar, thanks for the visit and the good words on my kind of blogging. Well I like what I saw thus I wrote from the heart. It is my way and it does made me happy.

It was a wonderful moment in our lives to have met you in you beautiful home. Asmah and I did enjoy every minutes of been there. The hospitality overwhelm us and We are glad that we are friends in the real world too.

I do hope to visit you again in due course and stay longer to exchange note that are close to our hearts.

Pak Idrus,
Pak Hassan's dream home is most definitely lovely, and very close to nature too. I need to go back to Kuala Terengganu soon, all these pictures are making me long for the East Coast, plus it has been so many years since I visited my relatives there.

~Covert_Operations'78~, Ee Lynn thanks for the visit and sharing your thoughts on the subject of this posting. Y

Yes, a simple but well done house and I simply love it. It a dream to us and a reality to Hassan.

A visit to the east coast from time is worth the while. Have a nice day.

Unknown, Sarliza USM kubang kerian kelantan, Pokcik Hassan had a stroke a year ago and I went to see him at the Specialist Hospital in Kuala Lumpur. He was asleep and could not talk. I only talk to his wife Salmah. I got the news he had a stroke from his son Anwar. Their kids have move him to one of the kid house in Damansara in KL. I just got the address from his son and would be visiting him soon when I am well enough to move around [ I am now recuperating from a surgery in August last year] BTW no one is living in their house in KT. Please contact me through my email pakidrus@gmail.com so that I can give you more detail of the house in KL as well his son tel. number. Thanks.