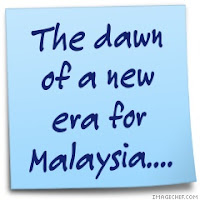 Folks, this is a true story. A story about simple folks with big ideas. It is a story of how the ordinary folks see the election and how the ordinary folks see the important of the election. In one stroke it is a story of Malaysian who love for the country come first. It is also shows that the citizen has come of age. This story is about a happening just a few days before the election and it would give some ideas of what I am talking about.

It all happen like this. I was at a hardware store nearby to get some parts for a DIY. I know all the workers and artisan at this store and as usual we got into talking of what we folks here call the 'coffee shop talk', and since it is just a few days before the election, the subject was on the election. The group in the shop were multiracial young people of my children's generation. A lady cashier ask me why is that many people seem not happy with the government. Another youth who was reading a vernacular newspaper nearby join in and says why not we change all the members of Parliament and the State Assemblies from the present one to a new set of the young and good people. Let them form a government and if they did not performed or they just get rich overnight or live beyond their means and arrogant, at the next election we just vote them out of office and replaced with new faces. This joke by that young man made all of us laugh. But then it got me thinking. It struck me that what he said was indeed a thought of wisdom. I just jokingly replied that it would be a good idea. After getting the items that I came for, I left with that thought hanging in my mind. What a brilliant idea that was. After all we are the people who put those elected people in those places and the power is with us and we surely could do the change.

I then told my friends and my relatives of this conversation and they all seem to be of the same opine and agree that it was also the thoughts of most Malaysian and a very practical one too. I eventually found that others had that idea as well but was still wondering whether it could happen in this election. The reason is that some of my generation are die hard loyalist with a particular political party. There are even jokes that if you pricked their fingers, it would bleed with the symbol/color of that particular political party. These people have sort of a feudal mindset and would support the political party that they believe, come what may. But after fifty years these group of people are old and a diminishing group of people. Anyway I kept wondering but somehow knew that change would happen but did not really expect that it would comes like a tsunami. It swept across the board. Malaysian no longer votes along racial or religion line. The just went to vote as Malaysian. A cultural changes indeed. Good for Malaysia, we are a multiracial country and in this election we all votes as Malaysian for the love of the country. They just votes in protest of the present government and vote for change. Just in a way like that young man in the hardware shop suggested. A joke that turned into reality. Indeed from across the country these simple folks with that simple mind did create that tsunami. With that changes, Malaysian are moving forward with confidence into a new era in politic.

The Federal Government as well as the government at the states level has already been formed and this time five states have became a non BN government. I hope the BN government as well as the once opposition party like PKR, DAP and PAS that became the new government in the five states [one state Kelantan they had governed for the last eighteen years] got the message of what the people want loud and clear. And start serving the people and not to be arrogant with their power. Remember that the real power is with the People. Have a nice day..
Posted by Pak Idrus at 4:18 pm

Great post. What I did was I went to http://www.subconscious-mind.org. From there, I followed the tips and guides that they offer on improving your brain power.Well, I tried and I definitely can see some improvement in my condition. So, you should consider trying it too.

Sarah, thanks for the visit. Have a nice day.