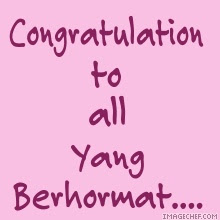 Well, we have gone through another election and it was a successful one. The power has been returned to the people and the people has shown that they are matured in the process of democracy. Some candidates was elected and some was not. So in any competitions there are winners and there are losers. To the winners who would be the Yang Berhormat or the Honorable Member of Parliament and the States Assemblies, congratulation of your success and to those who lost, please take it easy and do some soul searching. For that is the way of democracy, a political system that we had embraced. The whole idea of the election is to form the government of the people, by the people and for the people. All politicians elected should understand they are there because the people want them there and they should work for them. They should works with all sincerity and go on a straight path.

Personally I hope the new government both at the Federal level and the States would takes into account of what the people want and to manage a government that is transparent and accountable. Let us bury our hatchets and proceed on to built a more prosperous Malaysia. Have a nice day..
Posted by Pak Idrus at 6:49 pm

Pak Idrus,
I agree with you that Malaysia is a country that will go forward with its people together. Its like marriage, needs lots of work in progress.

I hope the new gov will learn from its past mistakes and not make the same mistake twice! ;)

shannyk-i, thanks for the visit and sharing your thoughts on the subject of our election. Your metaphor of 'marriage' is a perfect explanation of how we should nurture this country to move forward.

The message from the people is loud and clear and I hope they accept it and do a total soul searching for their own good.

Hope the change is for the better.
Have a nice day Pak Idrus.

hanafi, thanks for the visit and sharing your thoughts on this subject. I believe that changes would surely bring some goods.

The people has send a strong message to the politician and they should accept it and made the necessary adjustment.