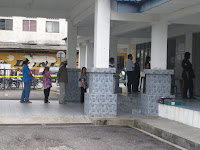 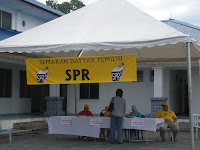 Well, like I had advice people to go early to vote, we went after a quick breakfast. The Polling station is not that far away, so in just five minutes we have done our responsibility to the nation. As usual everything was organised like clockworks.

I parked my car, been early it was easy to find a parking place. So we just walk to the Polling station, greeted by the friendly policeman who took care of the security of the area and since we knew through the Internet which lane to take, we went straight to lane One [this lane is specially for senior citizen like us]. Not many people at this hour at this lane but on the next lane, lane Two there are already voters queuing to vote. We were greeted with friendly faces of the official of the Election Commission and my spouse went in first and after the ritual she got her ballot papers and went to vote. I followed and got mine.

The procedure is that they look at your Identity Card [Identity Card is mandatory in this country and an offence if you do not carry one] and check against the election roll and if your name is there you get to vote. They ask me whether I know my roll number, I told them I knew and with that it was easy. They shouted my name so that the observers from the contesting parties could hear and marked their roll as well. They handed two ballot papers, one Orange in color [for the Parliament] and one slightly yellow [for the state] to another officer who punched the papers with a machine and hand it to me. I just walk to the kiosk and did what I had done before. Just put a cross against the symbol the I so choose. I did that with a clear conscience. I then walk a few steps and put the ballot papers in the two transparent ballot boxs. One for the Parliment and the other for the state seat. My spouse has done her part just a minute before and we both walk out of the Polling station, happy that things went right. The arrangement were superb and I am happy that we did our duty to the country in just mere minutes. I do not know which party my spouse vote and I never ask her. Voting is strictly confidential.

Just about getting out of the station I chat a bit with the policeman and ask him whether he has voted. He says that he has done it two days ago [The Army and the Police did a postal vote before the election, since they would be on duty during polling day]. Before leaving I took a few shots of the place as seen above. Well, I really felt good after that. Back home just after nine thirty this morning. Have a nice day..
Posted by Pak Idrus at 11:15 am

Good that you have voted so early!

neo, thanks for the visit. Yes we got it done early. Now lets wait for the result. Maybe the expected or the unexpected would happen!!. Have a nice day.

Aslmkm,
Your ritual is similar to mine this morning except that I walked from my house to the polling station - good exercise. Melaka kecik je kan?

puteri, thanks for the visit and sharing your experience on Polling day in Malacca. Have a nice day.

Pak Idrus,
I have fulfil my democratic obligation at around 11am today but I don't know the rest of the voters as no long Q and even the transparent ballot box is yet up to 50% fill in.So moment of truth tonight.

awang, thanks for the visit and sharing your thoughts on polling day in Kuching, Sarawak.

Well, it is good that you have done your voting. It is the beginning of the process of democracy. I think by 5PM today most would have voted. Let us wait patiently for the result.

I have a problem understanding why the vote is supposed to be so secret. Is it because we are afraid of the repercussions or that we shouldn't openly show, discuss, or encourage differences of opinion?
Or that the authorities or the opposition may target those who voted differently from what they wanted? Or it is a privacy issue.
Maybe you can enlighten me.

In an age when openness and being transparent is so important what is the problem with saying that one voted for this or that party or person?

Anyway, this on a lighter note. In many countries people do not have any qualms about telling who they voted for. I remember a story which went like this. A lady was asked by a reporter: "Whom did you vote for?"

Woman: "Whoever my husband voted for."

Reporter: "And who did your husband vote for?"

Woman: "Whoever I told him to vote for."

mr bojangles, thanks for the visit and sharing your thoughts on this subject.

As for the issue on confidentiality, just email me and I shall discuss with you in detail.