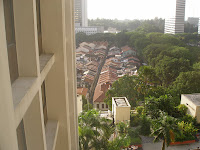 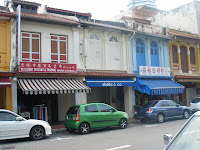 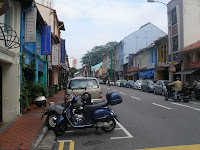 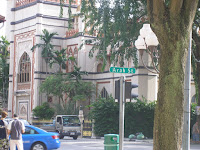 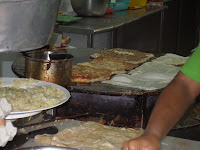 Singapore, yes our southern neighbor, south of Johor, once a part of Malaysia. Got a call from our nephew saying the his step father is ill and had been admitted to the hospital. His step father is my late cousin's spouse. She and her only adopted daughter has since been call to the lord and the only person left is this old man of eighties. Since the depart of his loved one, he has been living alone at his apartment in the Public Housing at Al Junid in Singapore. It was lucky that his step son who once live with them and work in Singapore, now living in Kuantan would visit him from time to time. So the old man is ill and admitted to the hospital. We decided to drive to Singapore to see him in the hospital.

Early on the Sunday morning [December 9, 2007] we left the house and drove on taking the highway to the south. The weather were alright all the way until some fifty kilometers from Johor Bahru when it rain. I drove slowly and arrived in Johor Bahru just after two and then proceed to Singapore where our nephew was waiting at the Singapore side of the causeway to lead me into the city and look for a place to stay. We soon found that it was not that easy to get a room during the holiday season but luck was on our side and we got a room at a four star hotel at Victoria Road. Check in and had a good rest after that five hours of driving from Kuala Lumpur. The Honda Accord is a great car for long distance travel and I did enjoyed the drive from Kuala Lumpur to Singapore, with a few stops at the R & R on the way.

At seven in the evening our nephew came and we went out to dinner at Arab Street, a great place to get the good old Indian Biayani. And then of we went to the hospital to see the sick relative. Well, at that age of eighty one we can expect anything to happen and we just took it easy. After a while we decided to get back to the hotel and rest for the night. The next day we wake up early and had breakfast at Arab Street and then went to walk around those rows and rows of old shop houses that belong to the Arabs and Indian Moslem from an era gone by. It is a textiles heaven of a sort and a great place if you are looking for exotic textile from India and other countries. We enjoyed the morning walk in this old part of Singapore where time stood still. It is just like before and has not changed much. The above images would give you some idea of what I am talking about, those old buildings dwarfed by the skyscrapers of Singapore.

At after ten our nephew came and we went to the shopping paradise of Singapore, the Orchard Road and had a quick look around of the shopping there and then after lunch went to the hospital again. On arrival we were told that the old man has just passed away. We said a prayer and get going with the funeral. Fortunately now they have various packages for such occasion. With that done and the difficulty of getting room for another night stay, we decided to leave for home and drive back. Since it was late in the afternoon and raining heavily we decided not to proceed straight to Kuala Lumpur but to stay a night at our condo in Malacca. With the rain and the darkness I drove slowly and arrived at our condo at just an hour before midnight. Had a warm shower and took a rest in our own home here. The next day after four in the afternoon drove back to KL and arrived just after seven in the evening. It was a tiresome journey but had to be made. My spouse and me are glad that we went to Singapore and saw him before he was called to the Lord.

Well friends, life is like that, one day you are around and the next day you are gone forever. The living must go on living for that is the nature of our species on this planet. So do not lament of the past but instead enjoy life to the fullest, for when our time is up we would have enjoyed living to the fullest. And like centuries before lives goes on and on, on this beautiful planet of ours. Take care. Amen.
Posted by Pak Idrus at 9:40 pm

Salam Pak Idrus
Al-Fatihah. May he rest in peace. We don't know when our time is up. It can be any where, any time.

Aslmkm Pak Idrus,
Anytime you're in Melaka do give me a call. Would love to see you and Kak Asmah again.
Enjoy reading your blog.

fauziah, thanks for the visit and the condolence. Well, that is living and when the time come you just sleep and no longer wake up. In the meantime do our best, give as much and enjoy living. Take care.

putri, thanks for the visit and those kind thoughts on my blogging. I am indeed glad that you enjoy my posting.

OK, the next time we are in Malacca, would give you a call. All these years never knew that you are the decedent of Hang Li Poh. Take care.

My condolences on the passing of your relative, Pak Idrus. Eighty is considered a good life span these days and he had loved ones at his side to the very end.

I spent a day at Arab Street earlier this year and like you felt like time stood still there. My husband and I enjoyed exchanging stories with the store owners more than buying their scarves and pashminas! It was there that I ate my first durian ice-cream bread sandwich in years! YUM!

Thanks for another good read, Pak Idrus.

rita, thanks for the visit and the condolence. I am indeed happy that you enjoy that piece of anecdote, a story of everyday happening.

Like your other half did,it is good to sometime take our time to talk to the shopkeeper on things of common interest. Even if we did not buy anything at least we makes the life of the sale people more interesting. Seeing new faces and talking to strangers do give color the their ritual of selling.

Pak idrus,
Innalillah.... My condolence on the demise of your relatives. At least you managed to see him before he passed away. Just timely visit by you and Kak Asmah.
Sorry I didnt read your blog any earlier.

zawi thanks for the visit and the condolence. Well life is like that and as usual live goes on and on.

Glad that you enjoy your visit to our humble pondok that day. Take care.

Pak Idrus
Alfatihah..sorry to hear the demise of your relative.Lucky thing you're there.

changgeh thanks fro the visit and the Alfatihah. Life is like that. Have a nice day.