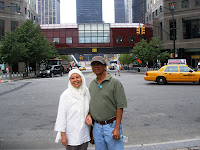 Last year on our way back home from the US we stop over at New York and one of the places that we visited was Ground Zero. 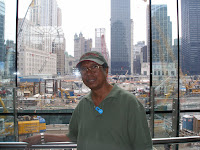 On that day September 11, 2001 while sitting watching TV in my home in Ampang Jaya I saw the two towers collapsed in front of my eyes. At that time I just could not believe it for I was there just a month before. Some time in August 2001 I was in New York on a day trip with a student who drove the car around the city. We had lunch of Biryani at Jackson Corner before returning back to New Haven. I was then living in New Haven, Connecticut in 2001 and left for home on mid August, 2001 just about a month before the September 11 happening. 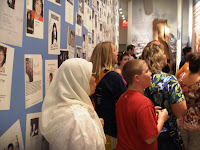 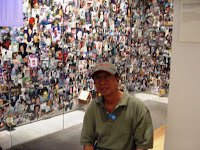 So during last year visit to the US we decided to stop over for two days in New York before boarding the plane at Newark for home. We stayed at Newark and did a day trip to New York to see Ground Zero and other places of interest. These images show us at Ground Zero and visiting the Museum that was specially set up for visitors to see some of the damages and things recovered at the sight after that incident. Before I left the place I said a prayer to all those lost soul in that incident and hope that it would not happen again. But then in the history of our planet things just continue to happen when we least expected. That happening has indeed changed the course of the world history. Anyway let us works for peace, for it is only through peace that we could share prosperity and continue to enjoy life. Have a nice day.
Posted by Pak Idrus at 12:38 am

Pak Idrus
Its nice to be like pengantin baru again, visiting places together while reminiscing. By the way, do you believe in the theory that the US bombed their own towers to justify spreading their power to the Middle East? The theory apparently argues that the destruction of the buildings seems to be so neatly excuted, & within minutes hidden cameras were ready to take shots of the planned disaster. Anyway, theories may also be refuted, right? Salam. Selamat menempuh Ramadhan fasa 3.

Your exhortation to work towards achieving peace in the world is a fitting message to commemorate the event of September 11.

Temuk, thanks for the visit and the good words on us. Well, when I was working I get to travel on official duty all over the world and all the time I had to leave my spouse at home to take care of the kids. Now that we have retired and with plenty of time on our side we decided to see the world together. What better way to enjoy life in our golden age then to travel together and see the world, after all the world is our village to enjoy.

Most of the time I choose not to follow the norm of the tourist does when visiting countries but instead choose to live and then travel internally. By that I got to enjoy living like one of them. The US is such a free country and that made living there such a wonderful experience. And one learns a lot living in there especially the true meaning of Freedom and Liberty.

New York has a population of 8.3 million and the city actually never sleeps, thus anything could happen during those 24 hours. As for camera you mentioned, if you have live there you would have notice that other then the personal camera, the city is often used as a setting for TV series, thus there are cameras everywhere and almost everyday of the weeks.

Dear Pak Idrus., thank you for your post on the 9/11 tragedy. I remember the morning well as I had a call from my mum-in-law who watches CNN all the time. I just couldn't believe what was happening in front of my eyes, when the towers collapsed. The World has changed from that day on. One day I would like to make a visit to Ground Zero.

louis, thanks for the visit and the encouraging words on my thoughts regarding peace.

We all know that without peace there can be no prosperity and without prosperity how could we enjoy living. We all must try to spread the energy of peace in anyway we could and I am doing a small bit of it here.

In this remembrance day do also have a nice day.

So how is the weather in Seattle now.

svllee, Steven thanks for the visit and the kind words on this posting.

Just imagine I was watching the Twin Towers just about a month ago in all its glory and I was supposed to return in September but cut short the stay in New Haven for no real reason at all. Had I stayed on I would have got stuck since most of the flight out of Newark was canceled after that incident. So it was really a shock to watch the happening. Anyway we all witness history and the world as we all know it has changed forever.

Befor leaving for the US I told my daughter that on my next visit to the US I wanted to visit Ground Zero and so I did. That spot has now became a sort of a must visit spot in NY and the Museum is worth the visit.

Just for perspective's sake, its unfortunate that we cannot visit other memorial sites caused by events like this:

... On the evening of 4th of May, the innocent villagers of Granai in Fatah Province in western Afghanistan were hit by a 2,000 pound guided bomb dropped by a B-1B strategic bomber. In less than half an hour, 147 children, women and men were killed - the biggest single loss of civilian life since the 2001 US and Great Britain's invasion of Afghanistan.

Maybe some cultures do not place much emphasis on remembering the pain inflicted on them by others. Or maybe they're just too forgiving. Or just too helpless to do anything.

Whatever. As we count down to this blessed month of Ramadan, we can appreciate in our hearts at least, without showy monuments and memorials, during the days of abstinence, the pangs and hunger that the million unfortunates experience not just for one month, but throughout their lives. And thank the Almighty that we just missed being there when the bombs or the towers fell.

Mr Bojangles, thanks you Sir for the visit and sharing your thoughts on the issue related to this posting.

Wherever and whenever I got the opportunity to visit memorial I do take the time to reflex and gave thanks and say grace for those folk who sacrificed their lives so that we may continue to live in a better world. It is only proper that countries honored their dead especially those serviceman/women who had served their country with honor.

In the early seventies Tun Razak wanted to have a Memorial of sort which he suggested to be call Pusara Negara at a piece of land in Kiara. I was in the planning group and we made suggestions but it did not materialized because some nationalist did not want all Malaysia irrespective of race and religion to be buried in one spot. That end the project, that piece of land has now became the Muslim Cemetery at Kiara. It would be great if we had a Pusara Negara where our hero are laid to rest in one spot. As it is they are just buried everywhere and soon forgotten, sad indeed.

To me Sir a Monument is important for it would became a mean to an end. Folks could visit whenever they have the time and relative could bring their loved one to show that part of their history.

As you know we have gone through many wars and tragedies. It would be befitting if all those who lost their lives are put to rest in one spot as suggested by Tun Razak, the Pusara Negara. Maybe the next generation of Malaysian would take seriously of what Tun Razak had envision.Only time would tell.

Salam, Pak Idrus. You are indeed fortunate to have been able to visit the twin towers when they were still standing. One of my friends asked me why Ground Zero remains as it is, as the area is 'prime property' and should be 'rebuilt' (!!!?!?!)

I responded that perhaps Ground Zero is a reminder that we should all, as individuals, try to be more compassionate, accepting, honest, understanding and just.

I hope there will be at least pockets of lasting peace in this troubled world of ours.

~Covert_Operations'78~, thanks for the visit and the good words as well sharing your thought on the subject of this posting.

Yes I was rather fortunate to have seen the building and took photograph in front of it. But I never thought of going into the building. Just imagine I was there watching the building again hardly a month before it collapsed. Well, that is the way it was and non of us could tell the future.

That day last summer I went to see the site and saw construction has began. They are still debating as of how the new tower would look and I am sure we would get to see a new development at the site.

Like you I hope there would be continuing peace for it is only during peace time that we could prosper together and enjoy life.

Pardon the intrusion. What was your purpose of stay in New Haven then, and how long? I was there for many years. In fact some alumni went bowling in Alamanda recently (see here). Had I realized, you'd been cordially invited. There's even a Facebook group. Or may be you're already in it? I must've then missed it.

I watched the 9/11 disaster on the internet at my home here in BBBangi, soon after it happened, in disbelieve. It was like watching a video game, except that it was real. I immediately woke my wife to tell her about it. She thought I was gonna wish her a Happy Birthday. And I completely forgot about it until she reminded me later.

I visited the Twin Towers once in 1981, by chance.

Gurindam Jiwa, thanks for the visit and sharing your thoughts on the subject of this posting.

Well, I was is New Haven to attend the Commencement of our youngest daughter at Yale. She did Master there. We stayed there for about three months, but for some reasons left in August before the September 11 happening. I have met many Malaysian at West Haven and it was Mohd Shah who drove me to NY as mentioned in this posting. Maybe we have met but I am not sure. I am sure you have met Dr.Hikmahtullah and Ibrahim there.

Of course I was shock to see the happening at my home in Ampang Jaya. I immediately phone our daughter in New Haven to inform her for she did have cable TV at her home. Well as you said it is unbelievable but it is for real and indeed it changes the course of history.

Do have a nice day and take care.

Thanks Pak Idrus. I don't think I knew any of them. I came back in 1994 after some 13 years searching for my soul. Alhamdulillah, I think I've found it.

Gurindam Jiwa , thanks for the return visit. Do contact me via my email and we could meet for coffee.