A week in November... 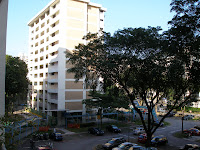 Well, it has been a week in November 2008. On Monday 3rd November I drove all the 364 kilometers journey to Singapore. Our youngest daughter who is now working at NUS [National University of Singapore] was back for the weekend and we decided to drive to Singapore with her. This is the first time we are going to Singapore after she landed herself a job in that city state. Now that she has a home in Singapore it would be easy for us to spend a holiday there.

We left KL just after nine in the morning and after several stop arrived in Singapore via the Second Link, the second crossing to Singapore after the Causeway nears Johor Bahru. There was heavy rain along the way and it continues to rain off and on but stop as we were about to arrive at the Second Link. We got cleared by the Customs and Immigrations [Malaysia and Singapore] in a whiz and arrived in Singapore at just passed three in the afternoon. Despite the rain it was an exciting five hours drive and as usual I enjoy driving the Honda on a long distance journey.

November 5, 2008. It is in Singapore that I watch excitingly the result of the American Election and saw that Obama made it to the White House. Indeed a historic moment not only for the American but the world as well. To me this is the change we all have been waiting for and I believe it would be good for the world.

The last time we are in Singapore was in November last year to visit a sick relative. We took the JB way and on the way back got caught on the normal traffic jam in JB. To me the Second Link is the best way to travel to Singapore and back. After a few days there we drove back, again using the Second Link and enjoy the drive all the way to Kuala Lumpur.

Labels: An event., On the road, Singapore

Hi,
Travel from Johor to Singapore and vise versa using Second Link? Hmmm... Never heard of it but I am always ready to discover new things.

Sorry for a shocking comment from me. Let me simply introduce myself, I am a Sabahan who went all the way to Singapore for better income. That's the end of my introduction. Anyway, I normally travel by Causeway Link from the SENAI airport and all the way by cab (RM40/4pax). I found it very comfy and cheap at the same time. Sometimes when I visit JB, I will just go all the way to Kranji by MRT and a bus to Johor custom. Seems to be very cheap to me!

Henry LeE, Lee thanks for the visit and sharing your thoughts on this posting.

I have work in Sabah before while in the government service. It is indeed a great place to live and enjoy life. The folks there are very friendly and still kept their tradition and culture close to their hearts.

As for going to Singapore, whenever I visit relative there or just for shopping I would stay in JB. Park my car there and take the taxi. Like you say one taxi just cost RM40.00 from JB to Singapore and back from Singapore to JB it cost Sing.$40.00 for the trip back to JB. It is better that way then driving the car to and in Singapore. Now that my daughter is working there and have a house, I would just drive using the Second Link without going through JB which is famous for the traffic jams. I think more people should use the Second Link. You get to the west coast of Singapore fast using the Second Link.

As for working in Singapore it is indeed a great place to make money but not a place to live. Nusa Jaya nearby is a good place to buy house and live. It is just half an hour to Singapore.