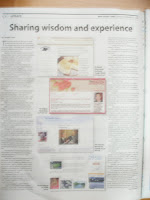 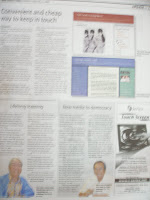 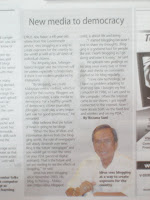 Once again senior bloggers are featured in the mainstream Newspaper. This time in the New Straits Times, in the Tech&U Section. Last year the Star another Malaysian mainstream Newspaper did a piece on this subject. Thanks to Rozana Sani of NST for narrating well the ways of blogging by the Malaysian senior bloggers which includes Me. Thus in some ways it gave more ideas and information to the masses on why blogging is important to the Malaysian society. To me blogging is a new media that has yet to be understood by the society. It is just like when Television was invented and first introduce to the society and became the New Media after the Newspaper.

In the beginning no one thoughts that the Television would became such an important media in our world today. Our culture are shaped by the programmes on the TV. We get news at the speed of light via the TV and get entertained in our own home by the TV. So in a way the Box do become a part of our lives. Just imaging a day without the TV. I know that for a fact. Sometimes long ago when our TV stop working and had to be send to the shop for repair, we were for sometimes were 'lost'. Even though at that time there was only one or two channels and the programme in black and white, our family without the TV became sort of despaired. We seem to lost somethings that we just took for granted while it is there. To get to a normal life again I had to borrow a TV and used it while our TV was been repaired. So that was how the TV affects our lives. And now we just could not live without it. We now have more then one TV in our home and hundreds of channels to select, so that everyone could enjoy their own channels as they like.

Coming back to blogging eventually there would be millions of blogs in this country just like we have TV set now. The government do not want the society to miss the ICT revolution so the Internet became one of the tool for that. With the Internet and now with Broadband blogging came into being. Before blogging the venue for the dissemination of ideas and information to the society were limited. Only the Newspaper, the Radio and TV could do that but with blogging the Pandora box on the freedom of expression is open wide. With a computer you could created your own 'Newspaper' in the Internet by way of blogging. Since ideas and information are important for an informed society in a democratic country, in a way bloggers are playing a very important role in keeping the society informed. An informed society means a knowledgeable society, which is a very important component in a democracy. It is also good for the authority in power, for it provides sort of feedback which would in a way help in good governance.

With this new found freedom of expression comes responsibility, so to bloggers do be responsible of what you blog. Blogging is still in its infancy and like any new media it would takes time to matured.. Happy Blogging.[Atuk mean Grandpa]
Posted by Pak Idrus at 9:04 pm

Pak Idrus,
Congratulations on being featured in a mainstream media. You represent the elderly bloggers like us and we are proud of you. Sad to say I missed that issue and will have to go and hunt for it from friends.
Have a good day.

zawi, thanks for the visit and the greeting. I am glad that they did that article about us. It would give the masses some positive idea of blogsphere. Have a nice day.

Congratulations to you and other Atuk Bloggers.Unfortunately,I cannot qualified for this category yet..may be in 5 years time.

berisman, thanks for the visit and the greeting. You are a young man still, so your time would come eventually. Does it mean that we still not allow to address you as Pak Adib. Have a nice day.

Pak Idrus,
Congratulation. You did it again.

i think that this is the 3rd time you being featured in the Mainstream media in less than a year!

i am optimistic that with your feature on it, it increases the number of not only senior bloggers, but also NUMBER of Malaysian bloggers.

akmal, thanks for the visit and the greeting. I hope that with this writeup there would be more and more people blogging. Have a nice day.

mutalib, thanks for the visit and the greeting, as well as sharing your thoughts on this subject.

Many thanks to the NST, the Star and TV9 for giving me the opportunity to talk of the important of this new media Blogging. Personally I am happy that they ask us the senior for our opine.

My hope is that those who read it would eventually venture into blogging and by that made Malaysia rich in material for the reading publics, especially so for the Internet user.

Congrats to you on this exposure. Enjoy it and I would like to wish you a great day and Happy Blogging.

You have an awesome blog. Nice music too.

rosli, thanks for the visit and the greeting.

I am indeed glad that you find my blog interesting. I visited you blog and found it to be a very informative site. And would surely visit it again from time to time.

As for blogging it is in a way kept my mental faculty healthy and thus alert. Blogging also give me the opportunity to share my thoughts with all, hoping that in a small ways it would made lives of others interesting as well.

Anyway it is good for folks like me who have plenty of time in my golden age. Enjoying life as its goes.

svllee, thanks for the visit, the greeting/wishes. I am glad the mainstream media gives us that opportunity. Just doing my best for blogsphere. We are the pioneer in this New Media. Have a nice day and take care.

Salam Pak Idrus,
CONGRATULATIONS!
I have to go to public library,photocopy for my reference.
Happy Blogging.

it's inspiring to be able to read the valued voice among the senior in the blogging world. for me, this is revolutionary.

awang, thanks for the visit and the greeting/wishes. Thanks to the NST for that opportunity and hope that Malaysian blogspere would get more exposure and help to create more blogs. Have a nice day.

cekmi, thanks for the visit, the greeting, as well as sharing your thoughts on my blogging. I am indeed glad that you enjoy my blog. Appreciate it very much.

At this age we folks in our golden age have much to share and blogging is one way of giving. To me personally it is the time of giving back to the society especially the present generation, the generation of my children and grandchildren. So I hope my posting would inspire others like you to enjoy life.

I have just visited your blog and found it to be very informative. I like what I read and hope that you continue to blog on the local scene especially those images which if not digitized would soon be lost with the so called progress in development.

I always miss the articles in the local newspapers as I don't buy them as they are government voice pieces run by unethical people. Anyway, congratulations on being featured. God Bless

david xavier, thanks for the visit and the greeting/wishes on this posting.

When I buy the Newspapers I just skipped the news and read the rest on my own times. Have a nice day.