The Plane and the Moon... 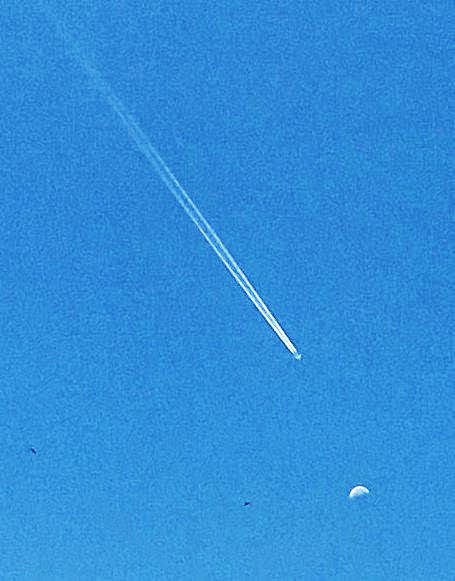 It was a beautiful Saturday morning November 15 and I was about to go out when looking at the sky I saw the trail of a plane passing by and on the other side I saw a half moon. It was a fascinating sight to watch at this early morning. Plane passes by daily at this part of the country en route to its destinations. In a split of seconds I thought that I should take a photo of both images but my DSLR with the telephoto lens was in the house and it would take a while to get the camera. As the plane was travelling fast it would just passed by in mere seconds. So I did not want to take a chance of missing this  golden opportunity to get such a shot. I had we me the new Nokia Lumia 735 with a better camera but had not used it to take distance objects. Anyway I thought I had to try. I aim the tiny camera to the sky and took two shots before plane went out of sight. I take a look at the viewing screen on the phone and saw the tiny image on one of the shot. I then edit it so as to get a closer look. I did it; I got both the plane with its white Wake trail and the moon. I was delighted to have got such a shot. I then posted in on Facebook for all to see and enjoy that moment in time. Here is that wonderful shot.

Labels: A happening, An event., One of those days..., Photography, weather

Assalam Pak Idrus. That shot was amazing. Look at the picture. I thought it might come out from NASA. The symmetry line of the plane's trail to the moon looks as if someone is shooting a bazooka aiming the moon. Great job Pak Idrus. If it was me, I won't be able to produce such a wonderful photo. Plus, my hands are shaky if I am in the similar situation.

Aziela, thanks for the visit and the good words on the subject of this posting. In photography it a chance like this we are waiting for. Always get you camera ready. In this case the cellphone camera did it. I was indeed surprised myself with the out come. It turn out to be one great image.

As for now my hand is still steady so still could use both hand for such shot.