Of the Kitten and Ah Keong...

A kitten fell from the ceiling to the back of a built in cabinet and got stuck there. I was not successful to retrieve it. So I call Ah Keong the handyman to help. Without hesitation he said that after he had lunch he would come over. As promised he came and for some one hour went to work sweating in the heat, above the ceiling, under the roof and when he found that the kitten had slipped further down at the back of the cabinet, he then came down and cut the back of the cabinet using an electric saw and retrieved the kitten, thus saving it. I hand him a payment for his service but he refused saying that he was happy that he had manage to save the kitten. I kept insisting that he take the payment for his service but he refuse adamantly. For that moment in time I was lost for words and thank him for been so kind. He then left with a smile. 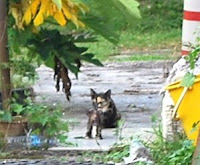 I took the meowing kitten and handed it to my spouse who put it in a cage and feed it with some milk. The we left the kitten in the cage at the back of the house so the it mom would come looking and when we are sure it is the kitten's mom we would released it and watch what happen. Sure enough after awhile when I went to have a look again at the kitten, the kitten's mom is there waiting for the kitten to come out of the cage. I then let out the kitten meowing happily following the mother. The mother pick the kitten on its neck and carry it away running fast and then stop. It turn back and to look at me from a distant of some eighteen meters away. Why I just wonder!. I took my camera and manage to take a snap of that moment in time and the image above which is rather blur shows the mother cat with the kitten hanging from her mouth.

This drama happens last week. It all started when we hear of meowing by a kitten on the top of our ceiling. As usual we did not take it seriously since some cat would take its newly born kitten to a safe place and would eventually carried the kitten after awhile but for three days we continue to hear the meowing of the kitten and some scratching. My spouse then asks me to have a look. At this age I tried not to do such an adventurous work, like climbing up to the ceiling but since there was no one else that I could ask to do that, I decided to climb up by borrowing a ladder from the neighbor since the ladder that I had was not high enough.

With caution I climb up to the ceiling and with a torchlight look around the top of the ceiling. It was hot up there and a very dangerous place to move around since the ceiling might give way if step on. I move slowly on the wooden beams and look for the kitten and then I spotted a hole on the ceiling. I tried to reach it but could not since the roof and the ceiling end there and it was too narrow to move on. There was no kitten in sight but the noise is still there. I knew at that moment that the kitten had slipped down through the hole on the ceiling to the top of the built in cabinet down in the room below. Since I could not do anything to retrieve the crying kitten I came down and after returning the ladder to the neighbor start thinking of what to do next. Then my spouse suggested that I call Ah Keong the handyman who had done roof repair and plumbing at our home before, for help. So without much thoughts I call Ah Keong and he agreed to come over. So folks that is the drama of the week that end with the saving of the kitten by Ah Keong, the handyman. Have a nice day.
Posted by Pak Idrus at 10:02 pm

Labels: An event., Animal Bird Insect, life like that

Not only a handyman but a kind man like you to save the kitten.
We had a kitten tucked away by its mum in the hollow of a big piping in the garden. Our dog , Robbie, barked non -stop and we had to investigate. Couldn't get it out at one go. Some guys from our security patrol came and pulled it out! Meoow!

This blog entry really made my day! How wonderful it is that you and Ah Keong came to the kitten's rescue, the kitten survived and its mother came back for it! What a glorious day it is for all concerned!

If the mother cat and kitten comes back and are hungry, Pak Idrus, pls give me a call. I will come and pick the dear cats up and give them a good home.

Best regards to all of you kind souls,
CO78

You and Ah Keong are a rare breed today. We can only pray that the breed does not go extinct.

By the way, when the mother cat turned around, I think she was paying her respects to you.

A helpless kitten and 2 good Samaritans.

You have one more handyman's chore to do: fix the hole in the ceiling. Otherwise your better half will ask you to climb up and investigate again in case another kitty, or something more insidious, decides to drop in again.

Keats The Sunshine Girl, thanks for the visit and the kind words on me and Ah Keong. Well, it is one of those things that happened and it is about saving life, so we did what we could and it ended with saving the cat and I believe that mother cat is happy about that.

We all must continue to save life of whatever species that inhabited this world of ours.

Thanks as well for sharing you experiences of similar situation.

Covert_Operations'78, Ee Lynn thanks for the visit and the good words on this posting as well as sharing your thoughts on this subject.

I am indeed glad it does made your day. We are happy that we managed to save the kitten and the Mother cat has taken it to the neighbor's house four house away to live with the rest of the stray cats. A lady of the house feed the strays.

cakapaje, Shah thanks for the visit and the good words on us.

Well I always believe that saving life is very important and we did what we could and now the mother cat is happy to get its kitten back. Well cat do have feeling too. Maybe it was trying to say thank you.

Mr Bojangles, thanks for the visit and the good words on us.

It was one of those time that we had to do to save life and we just did that. I believe the mother cat is happy we did that.

As for the hole on the ceiling, it has been covered up so that it would not happen again. At this age..going seventy it is really not safe to be that adventurous.

As a cat person, it's so wonderful to read such a story, Pak Idrus.

Sharifah, thanks for the visit and the kind words on this posting. Indeed I am happy too that we managed to save the kitten.

hello pak idrus , you seem like a wise old man who had been through life.help me out on these life question.Should we live a good life now or should we live a better life tomorrow?

xplorer[10:07PM], thanks for the visit and the kind words on us and this posting.

Animals have feeling too and living is as important to us as well the animals. So we should treat all species on this planet as equal.

xplorer[4:16]thanks for the return visit and the compliment on me. Well it is at old age that we have more wisdom and that is why I divided to share my thoughts with all by blogging.

The period Youth is a short one indeed so make hays while the sun shine and enjoy those great years of your youth.

Be a good person always and do not talk so much about religion but practice it norms and values to the core. Brand is not important, what is important is that you practice all the good values and enjoy doing that. i.e. if you see a trash on the road, just pick it up and be happy with it. Help others and never hope for any return. Do it and forget about it and be happy with what you have done.

Another aspect is that you must be sincere in whatever you are doing. Read this posting of mine http://idrus.blogspot.com/2009/02/present-is-gift.html .

Go on enjoying life now and not to wait till tomorrow. It is too precious to be wasted.

dear pak idrus,
i had open up the link that you give me.thank you very much for that.

Live your life at the present.Carpedium.
thanks again

xplorer, thanks for the return visit and I am glad that you enjoy that posting.

I have gone through life and hope that my experience would help other to enjoy life to the fullest.