Buka Puasa with the gang... 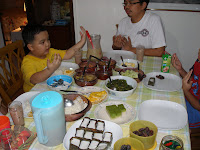 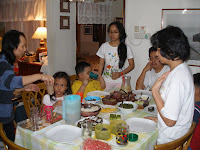 Last Sunday the grandchildren, their mom [our eldest daughter] and dad decided to Buka Puasa with us. As usual they arrive early, around four in the afternoon. Soon the house became crowded and with it came all the noises. All of the kids came over with their books and toys and soon settled down to do their homework. For a while it was quiet on the home front and then their usual selves took over and the house soon became alive with their kind of culture.

As usual when they are around I would have one laptop ready for them to use to served the net. The wizard of the Internet is our eldest grandson. He is just eleven and already savvy with the way the Internet works. Leave him alone and he would soon be lost in cyberspace. The other two young one Azib 6 years old and his elder sister who just start schooling are also crazy with the Internet. So they have to share the laptop with the eldest boy and this is where the 'war' would start among these sibling. As for the eldest, one is doing her SPM this year and the other in form four, they would use my laptop since I considered them to be adult already and could handle with care my laptop. At time I would allowed the wizard Anwar the eldest boy to use it whenever the 'war' over the other laptop became serious. This at time would cool the situation, at least for a while. As we all know too well kids are kids and at time it became part of the fun watching them grow. I have another Desktop upstairs but no one seem to care to use it, so they have to share using the computers when they are at our home. At their home they have their own, other then their computer games gadgets like the Games Boy and the like.

Let me bring back to the purpose of their presence here at Nenek's house today. They all are here to Buka Pusa together. So today to me and Nenek [grandma] it is indeed a special day for today we get the crowd back in our home, just like before when our kids were just growing up. Now with the kids grown up, the house is often left to us, the Nenek and Atuk [grandpa] alone. Soon it is time to Buka Puasa and they all gather at the dinning table to break the fast. As soon as Azan is heard on the TV, little Azib said that he wanted to say grace [Doa] before everyone start the breaking of the fast. It seem that he had learned the Doa at the Kindergarten and He love to lead the Doa. What a way to go for this little tot already taking over the leadership, this time at this dinner table for the breaking of the fast. Above is a snap of little Azib saying grace. As for us Atuk and Nenek it is indeed a sight that we are real proud to see. With that everyone start to break their fast, their own ways.

Well friends that is a wonderful day in our life. A colorful day indeed. One of those special day on our journey of life. Life in our golden age has its beauty and reward. This kind of event is indeed a rewarding event in our life, continuing making our life as colorful as ever. They say next weekend they would be coming over again and I believe that it going to be another wonderful Buka Puasa. Have a nice day..
Posted by Pak Idrus at 11:01 am

You are so blessed Pak Idrus to have all your children and your cucus gather at your house to celebrate both you and your wife as I see it. I bet you loved every minute spent with your loved ones, as much as you appreciate your alone times with wife and laptop. This reminds me that I haven't taken the pilgrimage of going home berbuka puasa with my parents back in Ipoh, and i can't wait to do that this Friday, bringing not only lots of homemade goodies with me but the noise and the smiles of my kids too. Though I'm not sure which they prefer more, he he he. Have a beautiful Eid Pak Idrus, the same sincere wish conveyed to you as the one that goes out to my father.

wiz, thanks for the visit and those kind works. True, it is one of those beautiful moment in our live. Oh yes we love every minutes of those moment in times. The Children and the grands do bring happiness so great that it is just too difficult to put in words and it do add color to our life. Have a nice day and hope that you would have a great time with your parent this Friday in Ipoh. Take care.

pak idrus,
Let us appreciate this few occassions when we have all the children and grandchildren come gathering at our place. For people like us its like a count down to when is the last such gathering going to happen. Some of our chilfren will be living faraway from us. Lets savour the moment while we can.
Glad to know that you are able have them.
Selamat berbuka.

zawi, thanks for the visit and sharing your thoughts on the subject that is common and dear to us Atuk and Nenek. Only people who are in the golden age really understood and appreciate these happening in our life. I am indeed glad we got connected.

BTW I live in KL and our daughter live not that far from our place, so it made it easy for them to come around from time to time. Like you said, indeed living became so meaningful with them around. A blessing in our golden age. Have a nice day and take care.

I have tagged you. Let us see the kind of food a lover of good traditional Malaysian cuisine have to offer.

zawi,thanks and have a nice day.

Freedom for the people of the Birmânia!


Have a good day

Now, my kids are at work and at University-leaving the house to just the two of us.Sometimes we do feel lonely and my boys have yet to get married.So no cucus lagi..

One day,insyaAllah I may have the chance to enjoy what you did last weekend.

David, thanks for the visit and your note. Yes, freedom for everyone on this planet. Have a nice day and take care.

Adib, thanks for the visit and the comments. Well life is like that, we all have to cross one bridge at a time first. The journey of life is like that. If we journey with knowledge and wisdom the journey would surely be fruitful and of course colorful as well. Have a nice day.

Salam Pak Idrus
One of the pleasures in life is to spend some time with the loved ones.
I know how havoc it can get when my mother invites her grandchildren to the house for buka puasa.
There are only two of them but they can bring the house down all by themselves.
But we have no complaints. We love having them around.
Selamat Hari Raya Maaf Zahir & Batin.

fauziah, thanks for the visit and those familiar scene that you describe. It is fun to have everyone in the home especially those kids 'yang tak makan saman'. That is truly a family sharing everything with the hearts including the fun. Have a nice day.