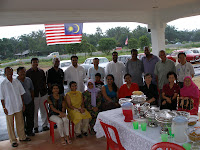 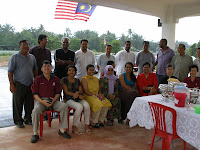 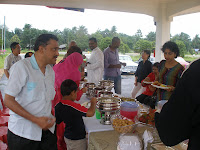 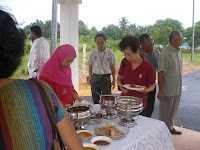 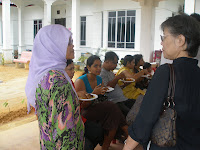 Well, it was a Sunday [yesterday]. The weather had been a bit hazy, otherwise it is just another of those Sunday. A veteran member of the club, once a PTD officer, now retired after an oversea duty at the Malaysian Embassy in New Dehli, India, decided to invite the club's members to lunch at his new home in Klang, the port city in the state of Selangor. He had been away for quite sometimes and as such had missed most of the club activities and to refresh himself and his spouse of the club and meet the members again, he decided to organised a lunch at his new home. My spouse and I decided to attend this lunch, moreover we had not as yet met the person. Norsham is his name. I have spoken to him over the phone when accepting his invitation.

So just after eleven in the morning we left our house by taking the MRR2 and then the KESAS Highway toward Klang. The club organiser had given us a route to follow so as not to get lost. I followed the direction to the later and arrived at the home of Norsham without any hitch. Had it not been for the excellent direction drawn up by one of our members, a Mr.David, I think most of us would have difficulty in getting to our destination. By noon everyone invited had arrived at the sprawling bungalow recently built by the host. It is really a big bungalow in that part of rural Klang. I am actually surprise as to the size of this bungalow. It is huge compare to the rest of the Kampong houses nearby. He had it built as his retirement home in this part of rural Klang.

With everyone has arrived and without much a do, we all were invited to lunch. As usual it was a buffet. We all did enjoyed the buffet and all throughout the gathering everyone had plenty to tell. We chat and yarn on various subjects. It seem the subjects never failed to end, with one person talking about this and that, the others cracking jokes, that makes everyone laugh with joys. It is like that when we club members met from time to time.

Personally my spouse and me did have a great time at this gathering. We get to meet the host and his charming spouse, as well as meeting new faces, including a young couple who brought their kids with them. As usual kids are kids and they seem to be enjoying themselves care less of what the adult were doing. Actually it reminisce us of our younger days when our kids would tack along wherever we go out. Now that they have grown up and on their own, it is no more like that. Those were the days. The beautiful and colorful days of our past. Well life is like that and we shall continue to enjoy life as we move on, on our journey of life. As usual event like this ends with photo takes and above are some images of the lunch event at Norsham. Norsham and his charming spouse are indeed a perfect host. Friends, Have a nice day and take care.
Posted by Pak Idrus at 8:57 am

Labels: Kelab Volvo Klasik, One of those days...

Hi Pak Idrus! We had such a wonderful time chatting with all of u. Must do this more often.

sheela jayaraj, thanks for the visit and those kind words. Yes we, my spouse and me do have a great time meeting you and the family, as well as the rest of the gathering. It is event like this that continue to makes life so meaningful. Hope to see you and the family again. Have a nice day and take care.