The proclamation of Independent on the thirty first of August nineteen fifty seven at the Merdeka stadium...I was than just eighteen years old and was present at the town Padang in Kuantan to see the rising of the Federation of Malaya flag on that day...At that time the country was known as Malaya and then in nineteen sixty three, Sarawak, Sabah and Singapore join Malaya to form Malaysia, thus the country is now known as Malaysia...Singapore later left the federation and now the federation consist of thirteen states and two federal territories of Kuala Lumpur and Labuan... Merdeka, Merdeka, Merdeka [ Merdeka means Independent ].. 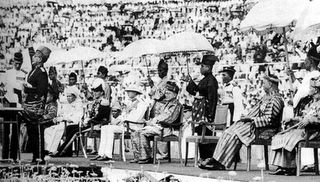 Shidah, I am indeed happy to see the country has progress this far, beyond my expectation.