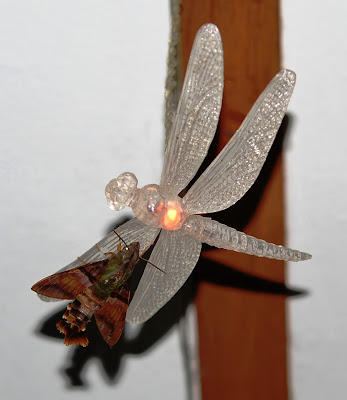 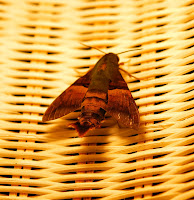 The other evening while our grand kids was playing at the patio after the Buka Puasa session, I notice Azib the youngest grand kid holding a long stick trying to make the insect move. He was just playing and when I asked him what he was doing, he said there is an insect under the rattan lampshade. He was amused and asks me take a look toward the hanging lampshade and that there is an insect there. I took a closer look under the lampshade and was delighted to see a Moth clinging to the inside of the woven rattan lampshade. I ask him and his elder sister to have a look as well and after telling them that it is safe to watch they both peep under the lampshade. Happy with what they saw yet another insect at close range they continue to play around it. Without wasting any time I went to get my camera and took as many shots of that insect before it fly away. It eventually flew away and then landed on one of the decorative lighting in the shape of a dragonfly that hang from the ceiling. It was attracted to the light and stayed there for a while. It is not always that one gets the opportunity to get a shot of this beauty of the night insect and this evening thanks to my grand kid Azib, who alert me to it, I got that opportunity to take the image of this night insect.

Rumi that great Sufi master has this to say about this magnificent flying insect "Judge a moth by the beauty of its candle" True, how elegant it look beside that 'candle' the lighted dragonfly, a decorative lighting at the ceiling of my patio. As we all know too well that Moth is attracted by the light, thus the two elements of nature that gave one the pleasure of been one, for it was the light that got it to be one; such a beauty. By itself it would not glow but with the light it was just magnificent, the magic fusion of the two elements, the insect and the light. Indeed a mystic of sort for us to wonder and appreciate the greatness of nature. In the images above it clearly shows the role of the 'candle' as expressed by Rumi; a beauty in the night. The two images above are a moment in time that I had managed to capture with the macro lens. Indeed a wonder of nature for us to enjoy. Have a nice day.

Nice pics, Pak Idrus. The moth is a beautiful creature, but I am quite scared of the dust around its wings. I wonder wether it is dangerous.

Temuk, thanks for the visit and good words on my kind of photography.

The moth and other living species on this planet are part of the eco system thus it is important to our our survival on this planet.

There are myth about the dust but like anythings else, it is best that we do not touch it but just to watch and enjoy the wonder of creation. Away if you ever touch it do wash your hand like you do with other substance that does not look clean.

Salam, Pak Idrus! How cute that the moth chose to land on the dragonfly lamp! Here are some fast facts for the kiddos:
1. Butterflies rest with their wings folded upwards, while moths rest with their wings spread out.
2. Butterflies have long, slender antennas with tiny knobs at the end. Moths have feather-shaped antennas.
3. Butterflies have slender, hairless bodies. Moths have stout, furry bodies.
4. Butterflies have long, curling tongues to eat nectar with. Moths eat when they are larvae, and after they emerge from their coocoons as full-grown moths, they don't eat anymore. The sustenance they need is stored in their bodies. That's why moths don't live long. Don't be sad if you see a moth die. It's just nature at work. It doesn't mean they were sick or diseased or hurting. Sometimes they come into our homes because they are attracted to the lights. Sometimes they are in their final moments and need a sheltered place away from harsh weather.

~Covert_Operations'78~, Ee Lynn thanks for the visit, the Puasa greeting and sharing your thoughts on the subject of this posting, the Moth. A very useful knowledge indeed. It is only at this age that I get to know more about this wonderful insect, thanks to you.

I am indeed glad that I got the opportunity to capture that image of the moth, for it is through the exchange of information that we get to know more about the wonder of nature that are aplenty around us.

With your explanations I now know the reason Moth come and then disappeared. Indeed fascinating of how other species spend their short life on the planet of our.

Pak Idrus, I just realised that Temuk has a question. Please permit me to answer it here.

The dust on the wings of butterflies and moths is actually scales, like the dead cells on our skin. Their wings are made up of scales. It is normally not harmful to humans unless you have a rare allergy to common insects. As a general rule, it is best not to let babies and children with asthma touch the dander or dead cells of ANY insects or animals, as it may cause eye, nose or throat irritation. It is not usually dangerous, but could possibly cause itching, especially if it goes into their eyes. So, no letting the kiddos blow gently on the wings to see butterflies and moths move. Some living things in nature should be admired from a little distance.

~Covert_Operations'78~, Ee lynn thanks for the return visit and sharing additional information on the Moth. I do hope Temuk get back here so that he may get an answer to his question regarding the dust of the Moth.

Thanks again do have a nice day.

Pak Idrus
Glad to know that the dust on moths' wings is actually their scales that we shouldn't be too worried about. In the past, whenever I found moths in my room, especially when it was closed with the air-cond on, I would be terrified, thinking of what the their dusty wings would do to my body. Thank you Pak Idrus, and thank you ~Covert_Operations,78~ for the information!

Temuk, thanks for the return visit. Indeed Ee lynn has brighten up our days with her knowledge of the Moth. It look like we are learning new things ever minutes as we move on in life. And blogging continue to provides more information and ideas to the needy. A wonderful tool indeed.