The mystic of Garlic... 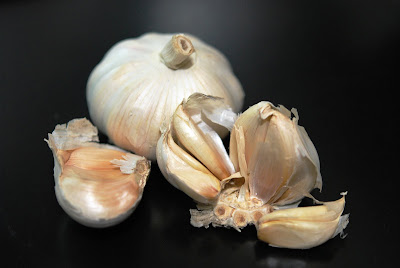 Garlic, yes the garlic that we often took for granted and enjoys it when it is presence in our food. It is in fact the one ingredient the we Asian could not do without it in our food preparations. It is one of the species of the Onion family such as the onion, shallot, leek, and chive. Would that dish taste as good without this wonder of an ingredient of the Onion family? I think it would not be so. Although it is just one of the ingredients I would think that it does play a very significant and pertinent part in the fusion of creating such a tasty dish every times.

Saute it in a pan and you would get an instance aroma that no other anion would give. Unlike the other onions it does not have layers but instead it is just in bulbs that cling together by an outer layer of skin. The way garlic is used does have a different effect on the food. Chopped garlic tastes differently then crushed garlic. The mere introducing of garlic to a dish made it taste different, so in a way garlic does became sort of an integrating agent in the fusion of the other ingredients that made foods taste so good.

Garlic is more then for just an ingredient for cooking for it does have medicinal properties that are known for it various cures since ancient times. In the realms of the world of myth and superstition it is said to possess the power of eliminating the evil forces of the dark world.

Been such a special plants I thought that I would use it as an object of my Macro Photography project. Above is an image that I captured using the macro lens which turns out to be as great as the subject itself, the Garlic. Take a look again at the image above and I believe you would agree with me that somehow that image itself has an aura of mysticism.

Enjoy that image and do have a nice day.
Posted by Pak Idrus at 12:02 am

i read somewhere that garlic can thin the blood, similar to the effect of aspirin. perhaps, like aspirin, it too can prevent strokes.

though that increased risk of bleeding is probably not good for those suffering from haemophilia or recovering from surgery or childbirth, ya? :D

Pak idrus,
The picture of white garlic on black looks stunning. I will paint it in oil and see how it turns out.
Carry on the macro photography, you seem to be so good with it.

Hi there Mekyam, thanks for the visit and the good words on this posting of the Garlic. Thanks as well for sharing your knowledge on this wonderful plants that gives us so much.

Plants is one species that gives us so much so that we may enjoy living on this good planet call earth. Without the plants our species would not have survived. As such we should give due respect to it and never ever take it for granted.

Like you I love the garlic, without it our Sayor and curry would note taste as good.

Pak Zawi, thanks for the visit and the good words on the image in this posting. Appreciate your sincere words on my kind of Macro Photography. I am still learning and trying to do a better job as I go along.

It would be great if you could transfer that image into canvas. It would be sure a great marriage of the two media in visual art.