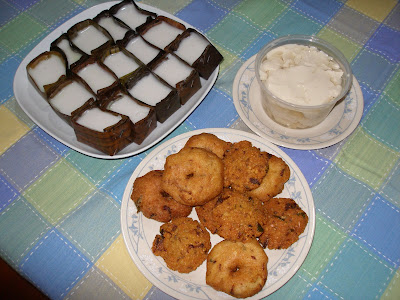 Where else that you could get that combination of the Chinese Tau Fu Fa, the Indian Waday and that wonderful Malay traditional cake such as the Tepung Pelita as shown in the images above sold at the Ramadan Bazaar during the fasting month but in Malaysia. It is the uniqueness of the Malaysian society that made such fusion possible.

Once on a busy Ramadan bazaar two foreign ladies were seen talking to each other. One quip that these folks who sell varieties of foods and drinks at the bazaar did not eat or drink all day long because they were fasting and yet it is them who had prepare these many delicious food spread that are been sold at the bazaar. That only happens during the fasting month. How true. The uniqueness of the Malaysian cultural scene comes the month of Ramadan.

Like mushroom that sprout after a raining night Ramadan bazaar sprang all over the country selling the best of foods, cakes and drinks that the Malay had prepared showing their culinary expertise especially for sale at the Ramadan bazaar for the duration of the month. The stalls at the bazaar which are erected on parking lots and other open spaces would just vanished into thin air after the month of Ramadan and would emerged again during the next Ramadan. Where all those traders go after the fasting month, one has just to wonder. It is like that all throughout the years. And the Ramadan bazaar is always worth the wait come the fasting month, for it is there where one could get all the goodies for the Buka Pusa [Breaking of the Fast]. 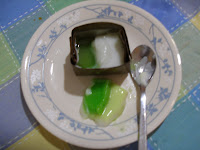 On the Tepung Pelita, It is a simple Malay traditional steam cake. It is prepared in a box made of banana leaves and look very simple indeed but do not allow the look to deceive you for in it is a kueh made in heaven. It has a unique texture and taste unlike any other Malay traditional cake. Scoop it with a teaspoon and eat it slowly. It sweet salty taste would just melt in your mouth. One is not enough and like Farina said in her blog you might end with having it every time you Buka Puasa.

So folks if you are around during the fasting month in Malaysia do visit these Ramadan bazaars. It is everywhere and surely you could find one near you. Sample those tempting spreads of Malay traditional foods and other Malaysian goodies that are been sold at the bazaar. I am sure you would not only experience and enjoy the colorful and vibrant atmosphere of the bazaar but would also enjoy those sumptuous foods. Even if you did not buy any goodies the experience of been there is surely worth the visit. Have a nice day.
Posted by Pak Idrus at 4:24 pm

Oh I really miss Tau Fu Fa. Back then, I used to go to Pasar Malam and never fail to get them. I always ask for the brown sugar.

It is actually the atmosphere that makes us want to go to pasar ramadhan. U get to see many people from different races and religion.

ms b, thanks for the visit and sharing your thoughts on Pasar Malam and the seasonal Pasar Ramadan. Nowadays these bazaar has became a tourist attraction as well.

Yes, it is the atmosphere that made us want to visit it and in the process get into buying...

Salam Pak Idrus & Family...It's a good masterpiece! I can't help, but keep swallowing my saliva...after Iftar of course!..hehe...Kueh Pelita is one of my favourite kueh's in Malaysia. My family loves this one. Ginny tried to do it, but without the fresh daun pisang it wouldn't taste as good as some Malaysians do....oooh I miss Malaysia! Would you think of me while you're enjoying that kueh?...he..he..

I have been in KL twice at Ramadan. As you described, the atmosphere is very special. The sudden mushrooming of stalls as you mentioned, in almost every wide open space or nook and cranny, was a great surprise to me.

And then there was the Buka Puasa every evening! I will always remember the anticipation, and the universal self discipline of all the other guests, sitting at the tables, a huge selection of tempting food in front of each person, waiting for the announcement on tv that the time to break fast had arrived.

Pak Idrus,
Salam.
Ramadhan Bzaars are places where those hardworking people are able to do business once evey year and make some money for their family use. Heard from them they make quite a bundle during that one month.

anon[9.44PM], Wan, thanks for the visit and the good words on this posting.

I am glad that you enjoy this posting and a die hard of this tepung pelita. Indeed one of a kind of steam cake and should be market to the world. Ginny should not stop there but go on experimenting and hopefully succeed in producing this wonder of kueh in America. I believe it take patience to eventually succeed in getting this kueh done perfect.

When you are back in Malaysian we would wonder around for that wonderful Tepung Pelita. In the meantime just visualized and enjoy it. Have a nice day.

hi there Louis, thanks for the visit and glad that you enjoy this posting.

Indeed the Ramadan Bazaar is one of a kind in this country. Only during the fasting month that these heaven of food materialized. It all start some thirty years ago on a smaller scale but now it is a big affair with clean and colorful environment. Moreover I notice that more and more young people are mending the store now.

I am indeed glad that you did get to enjoy this bazaar while here on your numerous visit.

As for the time of breaking of the fast, indeed a show of how strong one's conviction of his/her faith. If ever you are here again during the fasting month, I would surely take you to buka puasa at my home.

zawi, thanks for the visit and sharing your thoughts on this subject.

I am glad that the once unorganized pasar has improved to be a more organized one. Clean and the food are of high standard and the pricing is rather fair.

Happy that those folks with their culinary skill could increases their income during the fasting month and at the same time provide services to folks who do not have the time to do it themselves.

it's like "MUHIBBAH" version of ramadhan's dishes presented on the table.

also good for friends like loius and others to learn and seem our beautiful range of goodies ..

jalan rebung, Rizal thanks for the visit and sharing your thoughts on this subject.

The cultural influences are real, thus we get to taste more then some countries could in one go. Incidentally Louis have visited the Ramadan Bazaar and he loved it .

salt n turmeric, Farina thanks for the visit and sharing your thoughts on this subject. I do hope that you get it done perfect. Anasalwa and her gang did just that, read her blog.