A blogger who reside in the UK posted in a comment column of one of my posting that he is back in Malaysia for a short holiday. From time to time he had visited my blog and posted comments, thus we began to communicate. So in a way we are really not strangers. Blogsphere has in a way brought blogger close together as though we are one kind of a species that made friends easily. It this case we are indeed friends but not in the real world. Anyway it is a start of a friendship which began in cyberspere. In his latest comment, he suggested that if we meet for coffee. With that I replied that I would love to and then send him my cell phone number via his email address. A day later he calls me and we made arrangement to meet. 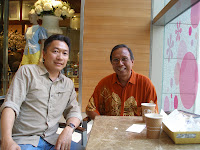 Eventually we met for the first time at the Loaf in the Pavilion, a new shopping mall at Jalan Bukit Bintang. It was a meeting of strangers who knows each other only in cyberspere and from that moment in time we are no longer strangers. We sat over cups of hot steamy coffee at the Loaf, a cozy cafe crowded with people enjoying their days. As usual with blogger we chat as thought we had know each other for a long time already. He then presented me with a pictorial book entitled 'Malaysians' as seen in the image above. He is the author of this book, his second book. His earlier book 'Outside Looking in Kuala Lumpur' which he gave me later contains photography of people and events in black and white. I thank him for those wonderful gifts. And since he had to leave early we parted and promise to meet again. He is Steven v-l lee and this is his blog. 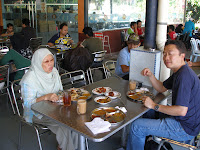 Last Sunday together with my spouse I took him to the NZ Restaurant at Melawati where we all had a late breakfast of Roti Canai, Tosei and of course the Malaysian famous Teh Tarik. The place as usual is throng with people especially so on this Sunday morning. We chat on various subjects that come to our mind and enjoyed that brunch. After a while we decided to leave the place and on the way back before sending him to the Keramat LRT station, we stop at our home in Ampang Jaya for a while and he was glad that we brought him to our home for he had seen some of the images in my blog and delighted with that short visit to our home. In his words which he emails me later he says "Dear Pak Idrus, Many many thanks for taking me to NZ for roti yesterday, and also to meet your wife. It is so refreshing to meet new friends through blogging especially when we share some things in common. You have a lovely and cozy abode also. Will definitely catch up the next time I am in KL." 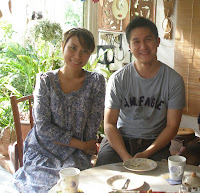 Friends, blogsphere actually create a new dimension in making friends all over the world. Just last month a blogger who read one of my posting made contact via email to me saying that he would like to meet me. So as usual I call him and eventually on the afternoon of March 8, 2008 he and his spouse [image on the left] came over and had tea at our home and enjoy the chat at the patio. He is Allen and he wrote about this meeting in his blog SISUAHLAI. So as you can see blogsphere is a wonderful place to be, to makes friends and in a way enjoy the color of living. Have a nice day.
Posted by Pak Idrus at 8:21 am

Labels: Books, One of those days..., people and places...

Great to hear that we make new friends by blogging. Beside that as a fellow Malaysian, is our pride to promote our beautiful country, Malaysia to the world. I truly amaze at your energy as a senior citizen.

Salam Pak Idrus,
You have been great in extending cyber friends to real friendship and also in extending true Malaysian hospitality. Congrats and keep up the good work.

Pak Idrus,
Your sincerity in making new friends transcends all the divides. Who says all the races can't socially integrate if we care to give it a try?
You are one lucky manto have so many friends not only in Malaysia but from all over the world.
For you infor I have started the project to improve on one of my restrooms to be something that I can use with comfort and look at it with prise. Its one of the ideas I got after visiting your house.

yes, i've glanced his book, with high-quality pictures in it. pictures worth a MILLION words, yes?

indeed, the Internet has made the world smaller. Just reminisce on how we met exactly a year ago after 11 years (yes, that is also exact).

and i remember that last vividly.

Thank you Pak Idrus, for your kind words. You do indeed have an oasis at your home and it was a pleasure meeting you and your wife in KL. Till the next time..

steven teng, thanks for the visit, the good words on me and my posting, as well as sharing your thoughts of being a good Malaysian.

Agreed with you that Malaysian must help to promote the country and one great way is through blogging. I have visited you blog and found it to be a great place to get ideas and informations about our country, Malaysia. Keep it up.

I hope we could meet for coffee some time in the future, just email you number and I would get to you. Have a nice day.

jaflam, thanks for the visit and the good words on the subject of this posting.

At this age I decided that it is the time of giving and making more friends. I enjoy meeting people and this includes strangers, for I believe that strangers are friends that you have yet to meet.

Hospitality is part of our culture and I am happy to share it with whoever are my friends. By that it makes my life more colorful.

zawi, thanks for the visit and the kind words on me and this posting.

To me every citizen of this country are Malaysian, thus I treat everyone as equal in respective of race or color or religion. We are of one species so we all should be friends. Friendship actually color my live journey.

I hope to see you creation when I next visit Pasir Mas. Have a nice day.

mutalib, thanks for the visit and the kind words on this posting. The two books that Steven presented to me are a wonderful collections that I shall treasured.

Well it is friendships that actually color our life. So makes as many friends as possible as you journey on in life.

svllee, thanks for the visit and the kind words.

Well, it was indeed great meeting you and like my Mrs said, we hope to meet your other half when you next back in KL.

Many thanks for those wonderful books. Indeed a treasure that would be part of my library.

Thanks Pak Idrus for featuring us. Keep in touch and happy blogging!

sisuahlai, [Allen] thanks for visit and the kind words on this posting. Indeed a great pleasure to get to know you and your Mrs. Hope we could go for lunch or dinner sometimes.