I was invited to give a Luncheon Talk at the Stamford College in Petaling Jaya. It was to be held at 1PM on September 28, 2011. Since I did not want to drive there I decided to just parked my car at the KLCC parking area and from there takes the LRT to the nearest station to the college. I was told by the Lecturer Rabiah who had contacted me earlier that she would pick me and suggest that I stop at the Asia Jaya LRT station. So just after 11AM on that beautiful Wednesday morning I drove the Honda to the KLCC car park and then walk to the station using the subway to the KLCC LRT station across the road. I used the Touch n Go card to get in and proceed to the underground station.

Soon the train arrived and to make sure I am taking the right train I ask a young woman nearby as to the right train and she was helpful indeed and told me that this is the one to take. The train stop and its doors opened. I went in and try to find a seat but there was none. The youngsters does seem to care to give their seats to an old man, so I just hang on hoping that someone would leave and I would take the seat. I need the seat because this is going to be a long ride. While I was waiting someone from behind me tap my shoulder and showed me the empty seat beside his. I thank him and sat there; happy that now I could just enjoy the ride.

The ride from the KLCC station to just before the Central Market station was underground, thus it was dark throughout the journey. Just after the Masjid James station the train went up into the open track above ground. It was really beautiful to see the burst of light as the train emerged from darkness of the underground to the clear blue sky as it move on above the street. From here the train travels above ground. On a clear day like that day I could see bright scenes of the streets on both sides of the moving train. It was a panoramic view all the way. I took my camera and take a few snaps of the scene. I felt real good sitting in the train, took out my iPad and surf the Net and wrote a few posting on Facebook. The iPad works well indeed in the train since I got 3G connection throughout the ride. It would surely be not that easy with the Laptop. Now I know why the Tablets computer is getting popular among the masses especially the young; its so versatile, light to carry and easy to use. After awhile I put back the iPad in the bag and just watch the changing scene as the train stop at one station after another. After just twenty five minutes the train arrived at the Asia Jaya station. On the way down to the ground level I call the Lecturer Rabiah who had promised to pick me up, telling her that I had arrived. She said to just wait at the front of the step and that she would come over in minutes. 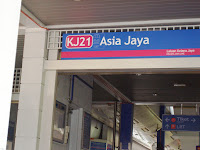 I take my time to look for the way to get out of the station. I move on without really going anywhere. I then ask a passerby and he pointed me toward another direction, the way to get out of the station. This is my first time at this station thus the confusion. With that I walk toward the step-way and then wait for her to arrive. Well when one wait time seem to pass by slowly. Since I had only spoken to her on the phone I actually do not know how this lecturer look so I watch for any car that would stop but most of the car just passes by and move on. After awhile a dark color car with a charming petite woman stop and I knew in that instance that it must be that Lecturer. I move toward the car and peep through the widow and mentioned her name and sure enough it was her. Without much ado I got into the car and then she sped away. We chat on small chat while she drove and eventually arrived at the college. Well folks it’s going to be the beginning of a beautiful day here at Stamford College in PJ.

Sounds like you are a newbie on the lrt! I use the public transport system almost daily - trains, buses & taxis. If you are at a loss taking the train, wait till you try and figure how to go to Sunway Pyramid from Ampang (for example) by bus. The RapidKL website is not much help. Sigh.

Seems like you were having a good and enjoyable trip.

el-f, Lily thanks for the visit and sharing your thoughts on the subject of this posting.

Well I have taken the LRT before but not that frequent and as for buses I am totally out of that, have not taken the bus for years so I actually do not have a clue of how to get from point A to B using our Buses. Anyway I did enjoy using the LRT, it one of those moment that I enjoy traveling on public transport.

When I was living in Boston I always that the public transport since I did not have a car. There I learn the way and was able to live a normal life without the car. So I think Malaysian must learn to do that as well so that one do not have to depend on car for their personal transport.

I think the public transport system in KL is improving and I hope in the not too distance future it would get better.

Yes I did had a great time that day. It was enjoyable indeed.