A Little Gem in Kota Bharu... 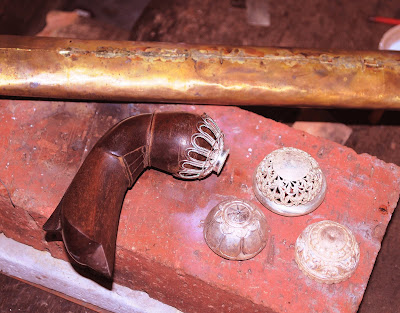 In Kelantan on May 26, 2011. Playing tourists while in Kota Bharu, I did it my way. I look at things differently from the other tourists. I always look for the uniqueness of the happening. So while in the Craft-center in Kota Bharu recently I wonder along the row of small shops that made the complex and eventually found one that I like.

I went in to have a closer look and then seek permission from the owner of the shop to take picture of the happening in his small shop. While doing so I talk to the artisan who were diligently doing their work of art; giving me the information that I need to understand what are they doing. I need information to write so those who read later on would have a better idea of the shop that I visited. In this case a shop that specialized in Silverware belonging to an artisan family headed by the father Mohd Maliki and the shop known as Seni Kraftangan Timur.

During my visit I saw three youth, two of whom are his kids were doing their works with ingenuity in creating their work of art. Both these kids have tertiary education which to me is a plus sign for good business. I often told parents that getting a college education does not mean you became a wage earner, it should be look at of getting more knowledge to improve one's quality of life. While there I saw them working on the ornamental part of the Kris and other fine silverware. Not everyone could create such a fine work of art.I was fascinated with the way they create fine jewelry and other aspect of turning a Kris Sheath into a beautiful piece of a work of art. Such Kris is often given away as present or just for keep as a mementos, to remind folks of its past glory in the once-glorious past of the Malay Kingdom. I saw the ornamental part of a Kris been meticulously created in front of my eyes. Only skilled artisan like the person in the image could do that with such confidence. The finished work done by hand continue to be a special work of art and there can never be two of a kind unlike craft that are produce by machine.

The image on the left show that part of the Kris sheath been crafted into a fine work of art. It was such a beautiful creation. Later at the hotel I thought that I would go back to the shop and place an order. Unfortunately all the shops closed for business at 6PM and the next day was a Friday. Thus I was unable to buy one. Most probably I would do that on my next visit there. So folks if you want to buy anything in Kota Bharu do remember that all shops closed for business at 6PM and that Friday is a holiday in the State of Kelantan. 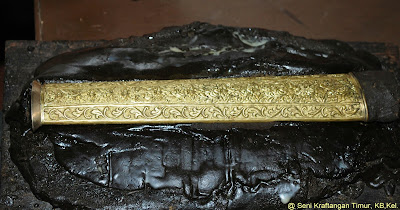 Have a nice day.[Please click on image to enlarge]
Posted by Pak Idrus at 12:01 am

Pak Idrus, come back again to Kota Bharu and this time by flight.

Pak Zawi, thanks for the visit and the suggestion. Would think about that.

Temuk, thanks for the visit and sharing your thoughts on the subject of this posting.

Indeed the craftsman/woman in this posting are themselves gems. This posting is in a recognition of their excellent works.

You passed throuh Terengganu and have forgotten to say that shops are also close here on Fridays!

Al-Manar, thanks for the visit and triggering my thoughts on the holiday in Terengganu.

Well, I was on the road from KB to KT on Friday and that does not cross my mind since at that time I am yet to shop in KT. The next day we found that it was difficult to shop in the town with the introduction of the One Way system which to me does more damage to KT in respect of shopping.

It is a pity that the shops in Kota Baru close so early, Pak Idrus. It would have been nice to be able to get a custom-made kris for your lovely home. I agree with you about tertiary education -- it is a stepping stone to a better future, whether you choose to be a wage-earner or to manage your own business.

~Covert_Operations'78~, thanks for the visit and sharing your thoughts on the subject of this posting. Well it is because the shop closed so early that they lose business especially from tourist who are willing to spend.

When I want to buy something that cost I normally think twice about it and it was after I got to that hotel that I decided to go back and buy or placed an order for that Kris but the shop was closed for business, thus they too lose their business. Aa for education I am always for acquiring knowledge because it is knowledge the would eventually let you toward success.