Reminisce.. The Boy with a dream... 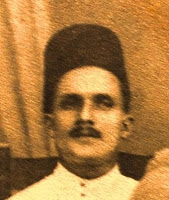 It was a full moon. The evening was beautiful with the ocean out-front glittering like a sea of diamonds, extraordinarily beautiful than the usual night. Full moon always gives the sea a touch of awesome and majestic. Allure by the call of the sea, he walk to the beach in front of his house and sat on the wooden bench. Alone, this time he was alone looking at the sea in front of him. It has been the scene of his village, a small community beside the sea, fronting the Arabian Ocean. He was just eleven years old and all that he could remember was the time he had played with his friends from the village, mostly boys of his age. The village is his home, the home of his father and his father's father before him. They all had live in this same village all the years.

He watches the seafaring vessels come and go at the small port nearby. Sometime out of curiosity he would walk to the port to look closer at those ships that come and go. It does fascinate him and wonder where these big ships would go from here. He had heard from his friends that some of these ships would go to distance-land in the Far East. And that some of his friends who had boarded these ships had not returned; for they had found new means of having a better livelihood in the new land in the Far East.

His life in this small community of Malabar, a small fishing village just off the coastal area has always been the same. Some farm their land with coconut, plant paddy their staple food while others would do small business to complement their daily income. This after all is a small self-sustained economy, it has been like that for all the years and life have being going on without much changes. Sometime he wonder whether it would be better for him to leave home and venture to other part of India or some other countries to seek a better life. He had heard so much from those people that come and go whenever ships anchor at the local harbor. He has seen some of his friends who left and return has more money now than before and lives a better quality of life and some start to do business on their own.

Like all those other boys of his age he has no education and education has never been part of the family’s culture of his village folk. They had been farmers or fishermen all their lives and had been poor all along. Sending children to school cost money, they would rather have their children helping them in the farm than going to school. That is why not many of the children from this village go to school. It has been like this for all the generations before and it is now the same. He sometime wonder whether it would be better for him if he had a chance to go to school but his parents are poor and he is more useful in the paddy field then at school. So like all his other friends he had no opportunity to go to school and life continues the same. At time he wonder whether it would be wise for him at this age to leave his village and venture to other countries that he had heard so much; to search for a job and earn more money and eventually start a family of his own here in this village. It sound to be good and he continue to dream of leaving his village for a greater pasture.

To be continue. Have a nice day.

a most enticing beginning! I don't know if this is fiction or based on a true story, but I can't wait for the next installment.

I'm already wondering if he leaves on his own, or does he get into trouble and flee?

Guess I'll have to be patient.

Adirya Kiratas, thanks for the visit and the good words on this posting.

I am indeed glad that you enjoy this piece of a story. It is a story that I had always wanted to tell to the world of the adventure of the past generation. Their dream for a better life for all.

As for now let me leave it as it is and and from time to time I shall write of the boy next adventure. It would surely be more interesting that way don't you agree!.

Salam, Pak Idrus! A very enchanting story so far. Love the descriptions of coastal village life. Makes me almost able to smell and taste the salt sea breeze. Eagerly awaiting the next installment.

~Covert_Operations'78~, Ee Lynn thanks for the visit and the good words on this posting. I am glad that you like the beginning of this of this adventure.

There are more to come as I move on and I am glad that you too get the feel of the sea like me. I believe we have live beside the sea and it has rubbed on us and we often enjoy it. The next episode of this story would come as I move along on my journey of life.

I trust you won't keep your readers in suspense for much longer.

Of course my main anticipation is finding out more about the hero of your narrative.

But, I have a secondary burning curiosity about the identity of the person in the portrait. To my mind he bears a remarkable resemblance to the English actor John Cleese!

,,,can you hear the sea
calling to those departed
wind sculpting white sand
barefoot print left to the tides
he left only his sweet songs.

,,,he now rest on cotton land. soul solitude at long last
plants and water is all food
no one else be meself good.

louis, thanks for the visit and the good words on the subject of this posting.

Ha! Ha! it look like this novel is going to became a block buster and maybe a movie deal already. How interesting!.

It look like I have to spend more time on this dream of mine to write a book. I am nowhere near it but with such encouragement respond I may have to burn the midnight oil to get it done fast.

As for the identity of the person in the image I would let reader to just speculate and wonder. If I expose it then there would be no excitement left and that would be the end of the story. Personally I myself still wondering as to what the end should be. So let it be a suspense and do continue to follow this saga as I write on.

Capt's Longhouse, Hey! brother thanks for the visit and that wonderful poetry relating to the subject of this posting.

I hope it would be alright with you if I includes this colorful poetry in the coming episode of the dream book of mine. It would surely add color to the novel.

Keep em coming and Yes Sir it does made my day. Have a nice day and Happy pirating.

Running free and blind
With the wind helping me glide
Meself flying through me dreams
The sand is so gentle
On my poor so worn down feet
Me have to get away.

Meself have no cares no fear, in this small world,
The little that I am.
Touching, loving, caring my heart afloats.
Carried on by that caring feeling.
Finally me new home away from home !!.

Capt's Longhouse, thanks for the return visit Capt. It is real nice of you to share another of your poetry here. Of course story never actually have an ending. It is just like a real life, it continue even after you have long gone.

Well, life is like that, you and the beautiful island of your in the China Sea and me in my dream of writing a book. Would get there one of these day. In the mean time let both of us enjoy the day.

Jewelle Tan, thanks for the visit and the good words on this part of the story.

Glad that you did enjoy this episode of the story. Well just watch my blog and you would eventually see another episode of this adventure. In the meantime do have a nice day.

my first try (guessing) is that this great person is related to you ....

JALAN REBUNG, Rizal thanks for the visit and sharing your valuable thoughts on the subject of this posting.

Well indeed a good guess but for the time being let keep guessing. It would be interesting that way and kept the suspense.